US Considers Mini-Nukes for Future Weapons of War 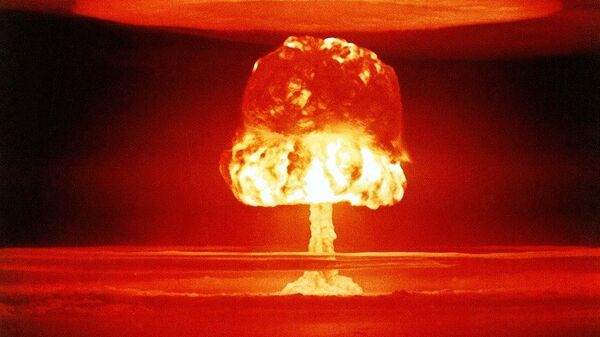 CC0 / /
Subscribe
International
India
Africa
As North Korea, India, China and others expand their nuclear arsenals, the vice chair of the US Joint Chiefs of Staff is gunning for the US to build up its caches of small-yield nuclear deterrents.

Speaking Thursday in Washington at a Mitchell Institute event, US Air Force Gen. Paul J. Selva said "if all you have is high-yield weapons to answer a low-yield attack, it’s still a nuclear attack."

Were the US to be targeted by a limited or targeted nuclear strike, "answering that with a conventional weapon is likely not going to have the kind of deterrent value as saying, 'Even if you use a low-yield weapon, we have options to respond.'"

As recently as June, China tested medium-range Dongfeng missiles capable of striking strategic US and Japanese bases, Sputnik reported. China "continues to have the most active and diverse ballistic missile program in the world," the National Air and Space Intelligence Center reported June 26, adding that Moscow is expected "to retain the largest force of strategic ballistic missiles outside the United States."

Stanford University professor Siegfried Hecker estimates there are around 25 nuclear warheads in North Korea’s arsenal and that Pyongyang’s military can produce between six and seven more nukes annually. India has between 120 and 130 nuclear weapons, yet experts suggest the Asian nation has enough plutonium for a 150- to 200-weapon nuclear force.

Last December, the Defense Sciences Board within the US Defense Department published a report on defense priorities for the incoming administration. Among the topics of interest and focus for the board were low-yield weapons.

The DSB included several recommendations in their report, some of which spark concern for US safety, according to critics who disagree with the development of a small- or variable-yield nuclear warhead. It encouraged the next presidential administration to "provide many more options" for reducing nuclear proliferation, including a "more flexible nuclear enterprise that could produce, if needed, a rapid tailored nuclear option should existing non-nuclear or nuclear options prove insufficient."

The only possibility stipulated in the report is to develop low-yield weapons. Stimson Center co-founder and former US State Department official Michael Krepon wrote in March that he assumes that means having baby nukes that would still have a global reach on a single-warhead ICBM.

California Senator Dianne Feinstein expressed her opposition to the development of yet more nuclear options in the US arsenal in an interview with Roll Call earlier this year, observing that "the proposal to research low-yield nuclear weapons is just the first step to actually building them," and noting that she would continue to combat "such reckless efforts" with "every tool at [her] disposal."