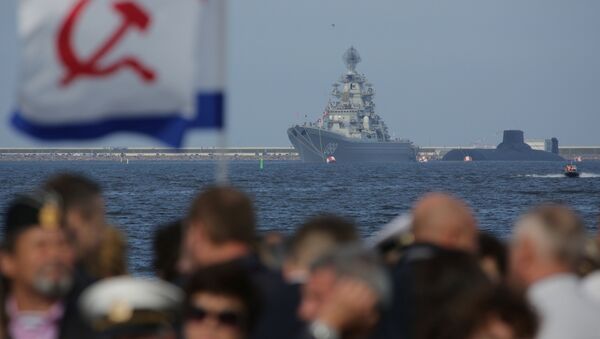 Best Moments of Russia's First Navy Day Parade in St. Petersburg
MOSCOW (Sputnik) – This year's major parade took place in Russia's St. Petersburg and the smaller ones were held in the cities of Vladivostok, Severomorsk, Sevastopol, Baltiysk, and Astrakhan.

"Hereafter the parade will be held annually as part of the celebrations of the Navy Day," Shoigu said.

The parade let the world know that Russia is a "great maritime nation" and demonstrated the combat capacity of its fleet, Shoigu stressed.

Shoigu expressed his gratitude to all the people who contributed to preparing and holding the parade.

"I ask the Navy Commander Adm. Vladimir Korolev, along with the interested military administrative bodies, to introduce proposals to encourage the personnel," Shoigu added.

Russia's Admiral Kuznetsov Carrier Graces Navy Day Parade Rehearsal
Shoigu recalled that this year was the first time the Navy Day parade was also held outside Russia. The naval parade was held in the Syrian city of Tartus, which has hosted a supply point for Soviet and later Russian navies in the Mediterranean Sea since the 1970s.

Russia celebrates Navy Day on the last Sunday of each July. The tradition, introduced in the 18th century, has been halted and resumed several times.