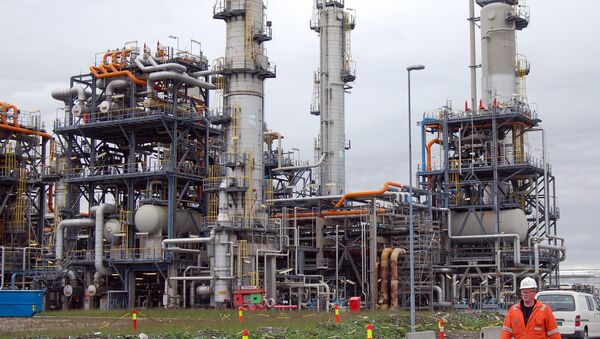 © AFP 2022 / Pierre-Henry DESHAYES
Subscribe
Over the past decades, little Norway has emerged as one of the world's leading nations as regards prosperity, welfare and human potential. Despite the fact that the nation's amazing welfare is mostly oil-driven, Norwegians seem to be willing to curb oil production (and forfeit some of the earthly blessings) for the sake of the environment.

Norway Successfully 'Eliminates' Poverty
The majority of Norwegians don't actually mind limiting the oil companies' output for the sake of nature. In a survey carried out by pollster Ipsos, 44 percent of the respondents supported this idea, as opposed to 42 percent who stood firmly against it, while another 15 percent were unsure, the Norwegian newspaper Dagbladet reported.

Remarkably, women were more willing to forgo oil-related benefits than men. A total of 52 percent of Norwegian women admittedly support restrictions on Norwegian oil companies, as opposed to only 36 percent of men. The environmental commitment seemed equally distributed throughout the country, with the exception of southwestern Norway, where the oil industry predominantly operates and remains the backbone of the economy. Furthermore, only respondents aged 40-59 argued against the limitations.

"It's amazing!" a delighted Norwegian Greenpeace leader, Truls Gulowsen, rejoiced. "The importance of the double role Norway plays as an environmentally-conscious nation and an oil state begins to emerge all the clearer. The Norwegian oil production has been disconnected from climate issues for many years. It is very positive that an increasing share of the population agrees that we must limit the oil industry for climate reasons," Gulowsen said, hailing the new trend.

Traffic Island: Small Finnish Archipelago Has EU's Highest Carbon Footprint
The results of the survey also pleased Ingrid Skjoldvær, the leader of the Nature and Youth non-profit organization. Her company has been involved in protests against oil-drilling plans near polar archipelagoes, intending to keep the Lofoten islands "oil-free."

"It shows that people's opinions are more progressive than politicians' climate policies. The Norwegians' responsibility bodes well for the conversion we all have to go through," Ingrid Skjoldvær noted.

However, climate policy researcher Espen Moe was a little more sober about the results of the survey than most environmentalists. According to him, the Norwegian population seems to be almost equally divided, which means that Norway seems to be standing "with one foot in either of the camps."

​"It's hard to say if this represents something new because we do not have a similar survey to compare it with. However, my impression is that Norwegians would like to do more for the environment," Espen Moe said. According to him, though, their determination yet remains to be tested, as people in times of economic crises tend to prioritize their finances above all else.

All for Oil: Norway to 'Drown Paris Agreement' in Record Arctic Exploration
Tommy Hansen, of the Norwegian Oil and Gas Association, pointed out that the survey proceeded from the fallacious assumption that once Norway winds down its production of oil and gas, the whole world will follow suit. Instead, he argued, production will simply be moved somewhere else, as we have not reached the peak of demand. Furthermore, Norwegian oil in itself provides lower carbon emissions in many countries, by replacing more polluting energy sources, such as coal.

In 2016, 185,300 people of Norway's total population of 5.2 million were directly or indirectly employed in the Norwegian petroleum sector, which indicates a 20 percent drop since 2013 due to an international oil slump.

In the 50 years since Norwegian petroleum activities began, about 48 percent of the estimated total recoverable resources on the continental shelf have been extracted and sold.