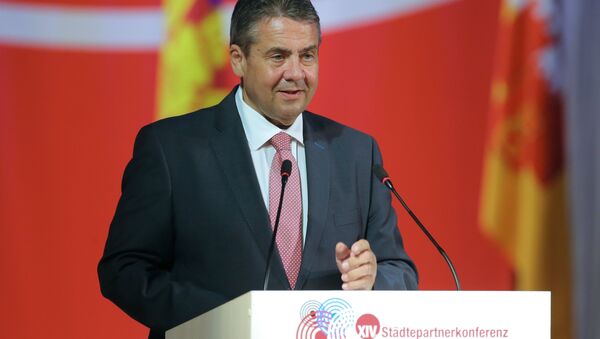 MOSCOW (Sputnik) — Gabriel criticized the US policy of "aggressively binding US economic interests with issues of external policy," stating that Germany could not accept Washington’s open desire to "push Russian gas from the European market" in order to be able to sell its own gas.

"We consider them [the sanctions] as more than problematic… This bill openly recognizes that they [the US] pursue economic interests, and we consider it inadmissible," Gabriel said at a press conference after the meeting with his Slovak counterpart Miroslav Lajcak, adding that the new legislation is "diametrically opposite to the interests of Germany and the European Union."

EU Unlikely to Stand Against US Sanctions on Russia Despite Economic Risks
The minister also noted the so-called extraterritorial nature of the sanctions, explaining that the new restrictions affect not only US-based companies, but also entities from around the world that have business on the US market.

On Wednesday, US President Donald Trump signed into law a new bill imposing additional sanctions against Russia, Iran and North Korea. The sanctions target Russia's defense, intelligence, mining, shipping and railway industries and restricts dealings with Russian banks and energy companies. The bill also stressed that the United States would continue to oppose the construction of the Nord Stream 2 natural gas pipeline. The law also limits the US president's ability to ease any sanctions on Russia by requiring Congressional approval to lift any restrictions.

What's Behind Trump Lambasting the Anti-Russian Sanctions Law He Signed?
Earlier, the Russian Foreign Ministry described the new sanctions as "absolutely illegitimate" and responded with its countermeasures, suspending the use of all US Embassy warehouses and its compound in Moscow. Russia also mandated that the US cut the size of its diplomatic staff in Russia by 755 people by September 1.

On Tuesday, Gabriel stated that the European Union would defend itself against an "America First" industrial policy pursued under the pretext of sanctions.