US, EU Have Many Differences on Political, Economic Issues - Russian Envoy 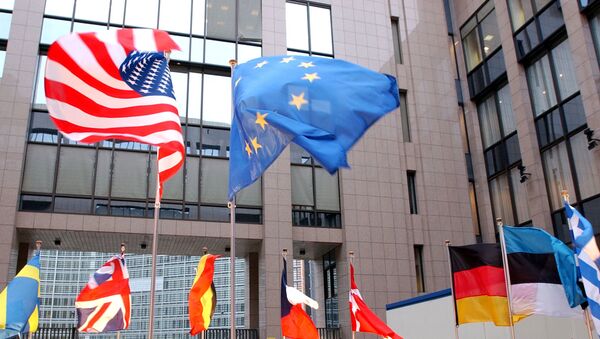 Russia's Permanent Representative to the EU made an interview to Sputnik on the differences between the US and the EU economic and political issues.

EU Unlikely to Stand Against US Sanctions on Russia Despite Economic Risks
BRUSSELS (Sputnik) – The United States and the European Union have many differences when it comes to approaching a variety of economic and political issues, Russia's Permanent Representative to the European Union Vladimir Chizhov said in an interview with Sputnik.

"If we look carefully at what we call a ‘Trans-Atlantic bunch,’ then we see that it sparks. We have seen that since the new US administration came to power and even earlier," Chizhov said.

The senior diplomat pointed out that Washington and Brussels had differences on a number of issues, such as the Paris Agreement on climate change and the Iranian nuclear deal.

"They also have [differences] in economic area that emerged some time ago. I recall that recently there was a case of the French bank BNP Paribas that was targeted by a total of $9-billion fine for the cooperation with the countries targeted by US sanctions. I think that 'Dieselgate' around Volkswagen also has a political and commercial background. I am not even talking about the WTO [World Trade Organization] hearing of a case between Airbus and Boeing that has been going on for decades," Chizhov outlined.

EU to Become Global Balancer if It Gains Geopolitical Independence From the US
The envoy added that the new US sanctions targeting Russia were also fueled by economic motives.

"Following the criticism of the Nord Stream 2 project, the US lawmakers without batting an eyelid wrote that the US administration must seek energy supplies to Europe. And then it is even more honestly said that this is necessary in order to create jobs in the United States. Now, there it was, an ‘honest competition,’" Chizhov added.

On Wednesday, US President Donald Trump enacted a new batch of sanctions on North Korea, Iran, and Russia. The sanctions target Russia's defense and economic sectors as well as restrict dealings with Russian banks and energy companies. The law also limits the US president's ability to ease any sanctions on Russia by requiring Congress' approval to lift any restrictions.

The law particularly targets the Nord Stream 2 gas pipeline project over the alleged threat it poses to the energy security of the European Union and Ukraine. Russian Prime Minister Dmitry Medvedev on Wednesday characterized the legislation as a declaration of a "full-fledged economic war." The new US restrictions have also prompted criticism from European authorities, who said that the sanctions concerned EU security interests.

The new US restrictions have also prompted criticism from European authorities, who said that the sanctions concerned EU security interests. On Monday, German Minister for Economic Affairs and Energy Brigitte Zypries said that the new sanctions would violate the international law.