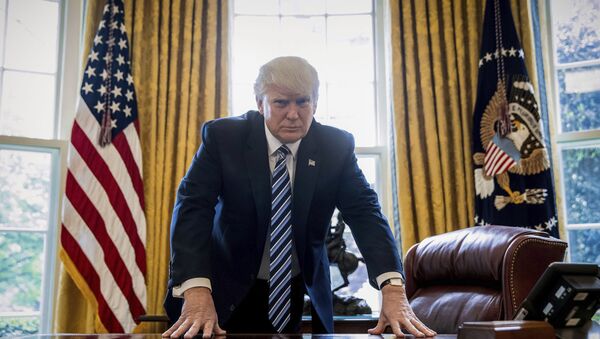 US President Donald Trump has signed into law a bill introducing new sanctions against Russia. According to political analyst Pavel Sharikov, US-Russia relations have become a victim of the internal political struggle in Washington.

Earlier, the bill was overwhelmingly approved by Senate and the House of Representatives.

The law also limits the US president's ability to ease any sanctions on Russia by requiring Congressional approval to lift any restrictions.

The new legislation punishes Moscow for its alleged meddling in the 2016 US presidential election, its alleged involvement in the situation in Ukraine as well as its military activities in Syria.

Trump also issued a statement expressing concerns with the bill, which he called "seriously flawed" because it curtails his ability to negotiate sanctions without congressional approval.

Trump Caved to Establishment on Russia Sanctions, Yet May Try to Repair Ties
For instance, Trump would now need Congress' permission to reverse measures imposed by his predecessor Barack Obama. He would also need lawmakers' approval to return the Russian diplomatic properties that were seized under the previous administration.

Russian Prime Minister Dmitry Medvedev said Wednesday that the new bill leaves no hope for an improvement in relations between Washington and Moscow.

Earlier, the Russian Foreign Ministry described the new sanctions as "absolutely illegitimate" and suspended the use of all US Embassy warehouses and its compound in Moscow. Russia also mandated that the US cut the size of its diplomatic staff in Russia by 755 people by September 1.

The bill has also been criticized by the European Union, particularly due to the concerns that the new sanctions will impact its economic interests, especially its energy cooperation with Russia.

Russia Views US Sanctions as Short-Sighted, Dangerous Policy
The signing of the bill by Trump was the result of internal political pressure over the US President, according to Pavel Sharikov, a research fellow at the Institute for US and Canada Studies at the Russian Academy of Sciences.

"Donald Trump’s plans towards Russia still remain unclear. Of course, the newly signed bill will further tie his hands and prevent him from implementing the plan he announced during his campaign. The US establishment now sees the issue of Washington-Moscow ties as part of its domestic agenda," Sharikov told Radio Sputnik.

According to the expert, taking into account the ongoing scandal over Russia’s alleged meddling in the US election, "Trump has fallen into this trap."

"Lawmakers who are not happy with Trump and his victory in the election have unanimously united against him and are putting political pressure on the President. At the same time, US-Russia relations have been a hostage of this pressure," Sharikov concluded.

Anti-Russian Sanctions: 'Trump Has Different Options, But No Real Choice'
Russia has repeatedly refuted the allegations that it interfered in the US election, calling them absurd and intended to deflect public attention from other public concerns.

Moscow has also rejected claims that it interfered in Ukraine's internal affairs and pointed out that Crimea rejoined Russia via a popular referendum in which the vast majority of residents chose that course of action.

Moreover, Russia has pointed out that it has acted in Syria at the invitation of the country’s legitimate government: that of President Bashar Assad. The United States’ military activities in Syria have been undertaken without the approval of the UN Security Council or the Syrian government.