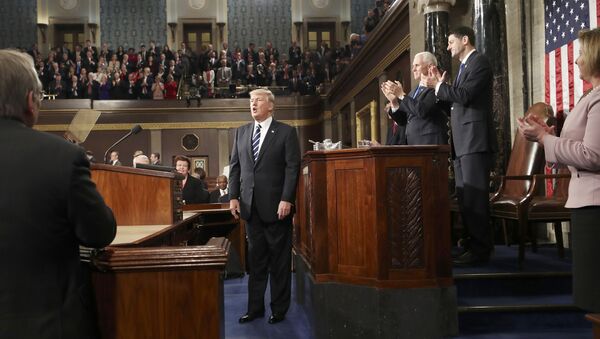 On Wednesday, United States President Donald Trump signed into law a new package of sanctions against Russia, Iran and North Korea. Earlier, the bill dubbed "Countering America’s Adversaries Through Sanctions Act" was overwhelmingly approved by the Senate and the House of Representatives.

Trump 'Falls Into a Trap' by Signing New Anti-Russian Sanctions
The sanctions target Russia's defense, intelligence, mining, shipping and railway industries and restrict dealings with Russian banks and energy companies. The law also limits the US president's ability to ease any sanctions on Russia by requiring Congress's approval to lift any restrictions.

The new legislation punishes Moscow for its alleged meddling in the 2016 US presidential election, its alleged involvement in the situation in Ukraine, as well as its military activities in Syria.

Congress and the White House were at odds over the bill for over two months during which the president managed to negotiate some minor concessions. However, the fact that Trump finally signed the new sanctions into law looks like his "serious political defeat," RIA Novosti contributor and political commentator Rostislav Ishchenko wrote in an op-ed.

On Wednesday, Trump also issued a statement in which he described the newly signed law as "seriously flawed," particularly because "it encroaches on the executive branch’s authority to negotiate."

According to the president, the bill contradicts the US Constitution by limiting the president’s flexibility in dealing with foreign affairs.

New US Sanctions Preclude Reconciliation With Moscow – Russian Lawmaker
"In terms of the American political tradition, Trump is right referring to the principles of the Constitution. The American Constitution doesn’t clearly define all possible scenarios in which the president can act independently from the legislative branch. But generally the White House has traditionally been in charge of external affairs," Ishchenko pointed out.

"As we can see, the US president can sometimes combine executive and legislative functions, which gives him room to decide on important international issues without congressional involvement," the author noted.

Moreover, the American political tradition presumes that only the president can overturn a presidential executive order. Sanctions against Russia were imposed at Barack Obama’s executive order. However, with the new bill signed into law, Trump cannot remove or renegotiate the sanctions in a unilateral move.

Trump Approval Rating Lowest Since May at 42 Percent - Poll
"Of course, this is a serious blow to Trump’s powers, but it is only a tactical defeat. In the long run, he may turn the tables," the article read.

According to Ishchenko, there is only one simple reason why Trump did not veto the sanctions bill.

"Both congressional chambers now have a bipartisan majority capable of overriding the presidential veto. Thus, Trump’s attempt to block the bill would make no sense and could deepen the tensions between the White House and Congress and among the legislative factions as well. If Trump had tried to veto the bill he would also bog down in a long legal procedure. Nevertheless, there is a consensus in Congress. If Trump had acted against it he would risk finding himself against the whole nation, on the way leading to his impeachment," Ishchenko wrote.

Trump finally signed the bill, but his statement proves he is shedding all responsibility for its consequences. Moreover, according to Ishchenko, Trump will now have a scope for maneuvering. In particular, Trump may be able to pressure Washington’s allies in Europe but as a president bound hand and foot by Congress.

Kremlin on New US Sanctions: Russia Will Defend its Interests
As for negotiating with Moscow, Trump still keeps almost all of his potential.

"Of course, Trump cannot remove the sanctions, but Moscow didn’t expect that it was possible. However, Trump still has the constitutional right to negotiate with Russia on Syria, Ukraine and other external affairs without congressional approval. At the same time, he could use Congress as an excuse while bargaining with Moscow," the article read.

Moreover, according to Ishchenko, Trump could also blame Congress for the possible future difficulties in Washington’s foreign policy, citing as a reason the congressional encroachment in his powers.

"If he plays his political game accurately he could not only make Congress to account for the US failures in the Middle East and Europe but also change the current situation in such a manner so that Congress itself will raise a concern over the constitutionality of the sanctions bill," the article concluded.