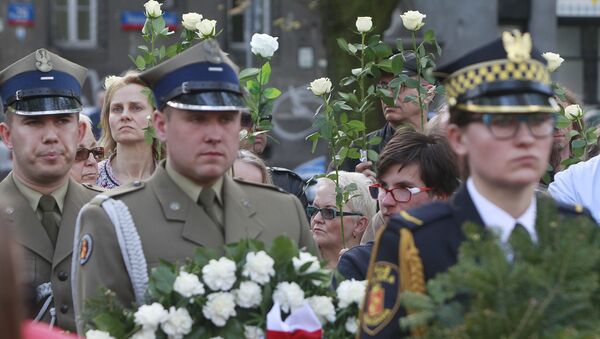 © AP Photo / Czarek Sokolowski
Subscribe
August 1 marked the 73rd anniversary of the Warsaw Uprising's beginning – a tragically unsuccessful 63-day campaign by Polish resistance fighters to drive Nazi forces from the country's capital, after which hundreds of thousands of citizens were slain in mass executions by the occupation authorities.

The two-month period, which ends October 2, is always a highly emotionally charged affair for Poles, replete with mourning and woe, but also celebration and burning optimism. However, 2017's commemoration has already been marked by hostility and antagonism — directed at Germany old and new.

On the evening of August 1, as football team Legia Warsaw observed a minute's silence prior to their Champions League clash with Astana, fans unfurled a huge banned depicting a crying child, a Nazi soldier holding a gun to their head, along with the caption "During the Warsaw Uprising Germans killed 160,000 people. Thousands of them were children."

The next day, Arkadiusz Mularczyk, a Law and Justice party MP, announced the government would be investigating the feasibility of claiming reparations from Germany for the damage inflicted on the country during World War II.

Subsequently, Defense Minister Antoni Macierewicz said Nazi actions during the 1939-1944 occupation of Poland were "genocidal… the only thing the Germans can do is to repay their terrible debt to the nation."

The catastrophic impact of the Nazi occupation of Poland cannot be underestimated. In all, 62 percent of the country's industry and 84 percent of its infrastructure was destroyed — and around 17 percent of its pre-war population perished.

The damage incurred by the Nazis has been estimated at US$640 billion in modern exchange values, however, the country has received little recompense since 1945.

In 1953, Poland waived its right to reparations from the German Democratic Republic in return for a quarter of Germany's historic territory being absorbed by Poland and Russia — and the Federal Republic of Germany restricted compensation to Jewish Polish citizens and their descendants.

After German reunification in 1990, Poland demanded reparations, and in 1992 received around US$1.4 billion.

Nonetheless, critics have been quick to suggest Warsaw's broadside is but a proxy in the ongoing clash between the Law and Justice party and the European Union.

After months of vacillation, the European Commission has finally triggered Article 7 — its "rule of law" procedure — against Warsaw in response to constitutional and judicial reforms, which EU leaders claim are signs of looming autarchy in Poland. The country faces being banned from voting in the European Parliament, sizable fines and sanctions.

Meanwhile Poland comes together to honour the heroes of 1944. #PW #WarsawUprising pic.twitter.com/aWSQVfU87m

In response, the German government said the subject of WWII claims had been long-closed, and it would refuse to enter in serious discussions with Poland on the topic.

Still, if Warsaw's most recent bid for contemporary compensation is remotely serious, the country would not be alone.

In 2015, Greek Prime Minister Alexis Tsipras demanded Germany pay further reparations to Greece for damage incurred during the 1941-1944 Axis occupation. Greece valued the war reparations to be the equivalent of US$332 billion.

Of course, Greece was — and is — embroiled in a battle of its own with the EU generally, and Germany specifically, over its debt repayment regime, but Tsipras' claim was arguably not entirely without merit.

After the war, Greece was given a comparatively trifling 115 million Marks by West Germany as compensation — many Greek governments have claimed this to be an initial payment of a much larger obligation ever since, although Germany has consistently countered that the 1990 Two Plus Four Agreement effectively settled all reparation claims by European countries.

It's not merely countries at odds with Germany that have sought recompense for its war actions. In 2004, the Italian Supreme Court ruled Germany owed compensation to relatives of the victims of a 1944 Nazi massacre, although the ruling was not acknowledged by Germany, and overturned by the United Nations in 2012.