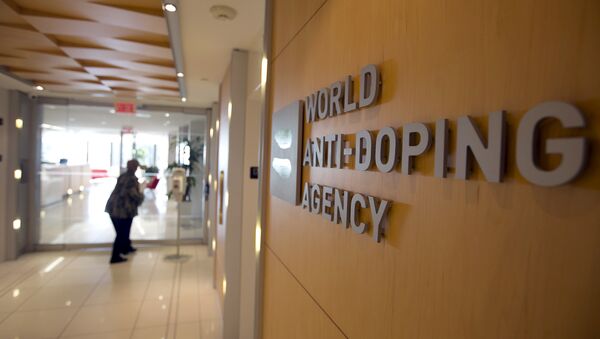 © REUTERS / Christinne Muschi/File Photo
Subscribe
Russia considers that doping in sport is unacceptable, though it disagrees with some aspects of the report of the World Anti-Doping Agency (WADA) independent commission, headed by Richard McLaren, Kremlin spokesman Dmitry Peskov said Thursday.

WADA Unveils Roadmap to Anti-Doping Compliance for Russian Agency Rusada
MOSCOW (Sputnik) — On Wednesday, WADA published a roadmap to code compliance outlining "reinstatement criteria" that Russia’s body RUSADA still has to meet. The agency said 12 criteria, including public acceptance of the McLaren report, were to be fulfilled before WADA’s independent Compliance Review Committee can recommend that RUSADA be declared compliant again with the World Anti-Doping Code.

"In general, we are committed to the idea of the Russian president… of the inadmissibility and unacceptability of any manifestations of doping in sport… and [idea of] the maximum possible cooperation with relevant international structures. As regards different reports devoted to the problem, you know that there are several issues we do not agree with," Peskov said at a press briefing, answering the question whether Moscow should accept the results of McLaren report.

In 2015, WADA accused Russia of multiple anti-doping violations and suspended the RUSADA's Moscow Anti-Doping Laboratory. In 2016, McLaren presented two-part report on anti-doping violations in Russia, which alleged the existence of state-supported doping system. Russian President Vladimir Putin and Sports Minister Pavel Kolobkov have repeatedly denied these accusations, while admitting that Russian sports did have some doping-related issues.