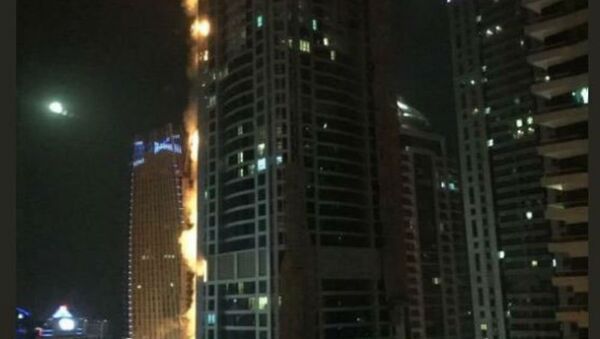 © Twitter/@IntelCrab
Subscribe
The fifth-tallest residential building in the world went up in flames in the wee hours of Friday morning.

"Massive fire just started in the skyscraper opposite us in Dubai Marina," journalist John O'Nolan said on social media.

The fire spread over dozens of floors. The tower, called the Marina Torch or Torch Tower, has 86 stories, 79 above ground, and stands at 1,105 feet (336.8 meters) tall. For a brief period, it was the tallest residential building in the world, passing the Q1 building in Gold Coast, Australia. In 2012 a building across the street from the Torch became the tallest residential skyscraper in the world – until 2015, when 432 Park Avenue in New York claimed the top spot.

Eyewitnesses on social media described the blaze as "completely out of control." The building previously suffered a major fire in February 2015.

"Dubai Civil Defense is currently dealing with a fire that broke at a tower in Dubai Marina," ​​the government of Dubai confirmed over Twitter.

"I have 4K footage for this from main camera but internet to slow to upload. Looks bad. Just reached roof level," O'Nolan added.

The tower was been successfully evacuated, city authorities said early Friday, and after several hours of firefighting, the blaze was declared under control. "Fire at the Torch Tower has been brought under control. Cooling operations are underway. No inures have been reported," the Dubai Civil Defense media office tweeted.

000000
Popular comments
Seems to be a regular event in Dubai..