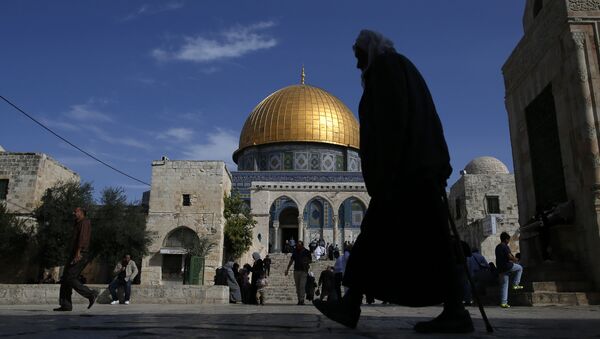 Palestine's Hamas movement unveiled a new initiative aimed at reaching reconciliation with Fatah, the Ramallah-based leading faction of the Palestine Liberation Organization, amid crisis which erupted around the Temple Mount in Jerusalem following Israel's decision to impose restrictions on access to the Al-Aqsa mosque, media reported on Thursday.

MOSCOW (Sputnik) — According to Anadolu news agency, the initiative envisages Hamas' readiness to dissolve an administrative committee that it established in March and which coordinates the activity of Gaza's public institutions, as soon as the unity government assumes office in the Gaza Strip. Fatah has repeatedly called for committee's dissolution, claiming that it prevents the unity government from operating in the area.

On Wednesday, Salah al-Bardawil, a member of Hamas’s influential political bureau said that the new push for intra-Palestinian reconciliation was necessary due to "the voices of the Palestinian masses who revolted in Jerusalem and won the Battle of the Al-Aqsa Gates."

WATCH: Israeli Security Lowers Palestinian Flag From Temple Mount
The conflict between Hamas and Fatah escalated in 2007, leading to a split and Hamas’ takeover of the Gaza Strip. Repeated attempts have been made by regional forces to achieve a reconciliation between the two parties, but all efforts have so far failed.

In January, Fatah and Hamas agreed to form a unity government after a three-day talks in Moscow, however no further success has been achieved so far.

Jerusalem Police Warn Muslims of Casualties if Temple Mount Clashes Continue
The Temple Mount, which is the third holiest site in Islam, was equipped with metal detectors and surveillance video cameras to monitor its territory after deadly shooting at the site on July 14 that left two Israeli police officers killed. The measures led to violent clashes in Jerusalem and the West Bank and forced Palestine to suspend contacts with Israel over several Palestinian deaths.

Last week, Israeli authorities decided to remove the restrictions at the entrances to the Temple Mount in a bid to ease Arab-Israeli tensions, however, Palestinians continued clashing with police. On July 28, media reported that Israeli authorities renewed restrictions on the access to the Temple Mount and banned men under 50 from entering the site for Friday prayers.