Dallas Man Gets Attacked on DART Train by Teens (VIDEO) 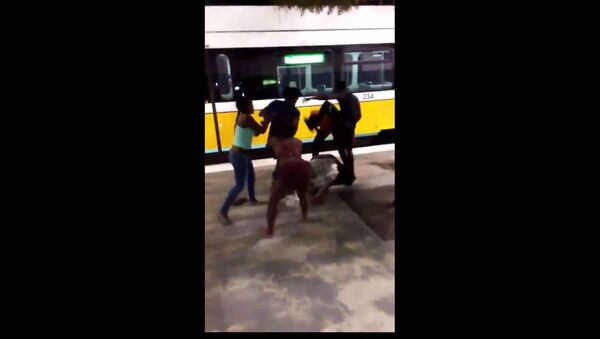 It was 11:30 p.m. on Sunday when Kennan Jones, who was on his way home from school, found himself under attack by a group of teenagers on a Dallas Area Rapid Transit train.

What set off the unruly teens? They were asked to put away their marijuana until they got off the train.

"When they started smoking, I’m like, 'Come on, man. We’re on a train. Can y’all just wait? Just wait,'" a bruised Jones told NBC5.

Seconds after the encounter a young woman from the group approached the 44-year-old commuter and spat in his face.

"I was like, 'You lucky I don’t hit females, little girl, because I would beat your ass for that,'" Jones recalled. "And that’s when everything went from zero to 100."

Posted on social media, the footage shows five men and two women cornering and beating Jones repeatedly as he tried to push the teens away. As the train stopped at the Deep Ellum Station, the brawl poured out onto the platform.

On the platform, Jones managed to get back up and start walking, but the group followed and swarmed him again. One of his attackers can even be seen using a skateboard to beat Jones until he is left motionless on the ground.

Once the train announces it’s leaving, the group quickly piles back onto the train.

Texas Cop's Attack on Teens Sign US Needs to Wake Up to Police Violence
Speaking to WFAA, Jones, recovering from a black eye, bruised ribs and sore knees, questioned why the train operator failed to act, instead opting to close the doors of the train and head onto the next station.

"Instead of you calling the police, or staying there and closing the door, you take all the people who did it home," he exclaimed.

Jones wasn’t just upset with train operator, he had a bone to pick with the authorities as well. DART officials first claimed the victim didn’t want to press charges, however, this wasn’t true.

"People change their mind," Mark Ball, spokesperson for DART, told Sputnik. "DART was investigating it all along so that we could press charges on our own if necessary."

Truck Driver Charged With Immigrant Smuggling Could Face Death Penalty in Texas
Though many critics are saying that the main issue is that the trains lack security cameras and manpower, Ball says it isn’t so, saying there are 20 cameras at each of the systems 64 rail stations.

In the forces’ determination to cease any similar events in the future, DART will be increasing its police presence during the evening hours along with bringing "13 municipal partners to provide additional patrol coverage to all stations," according to Ball.

While no arrests have been made yet, Ball indicated law enforcement has identified some of the suspects since the footage, filmed by Titus Stevenson, was shared on social media July 31.