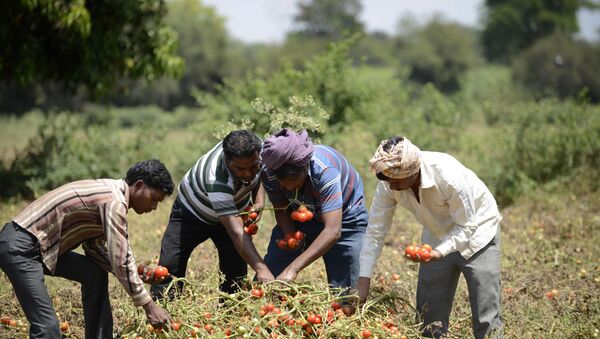 A recent study has found that a one degree Celsius increase in temperature in a single day during the crop growing season in India has led to the suicide of 70 farmers on an average.

NEW DELHI (Sputnik) — A study published in the Proceedings of the National Academy of Sciences claims that climate change has led to suicides of over 59,000 Indian farmers in the last three decades as an increase in temperature has reduced crop yields.

The study was carried out using data from all the states of the country. The author of the paper, Tamma A. Carleton from the University of California, Berkeley, tested the link between climate change, crop yields, and suicides by comparing the number of suicides across India from 1967 to 2013 with crop yield and climate data. She found that crop loss due to heat damage caused an additional burden on farming households and that at times led to suicides. The paper further says an increase in rainfall by 1 cm during the crop growing season leads to a decrease of about 0.8 deaths per 100,000, thus lowering the suicide rate by 7% on an average.

Trump Pledged to Think of US Withdrawal from Paris Climate Deal - Macron
Dr. Carleton found that increased suicides were reported when temperature increased during the crop-growing season. A similar increase in temperature during seasons when crops were not grown did not result in the increase in suicides.

Crop yield data from 13 states from 1956 to 2000 were then compared with climate change data. Dr. Carleton found annual yield falling when the temperature was above 20 degrees Celsius during the crop-growing season.

The study, however, does not look at other factors contributing to farmers' suicide like debt, government policies, health issues, and family problems.

Various reasons have been offered to explain why farmers commit suicide in India, including floods, drought, debt, use of genetically modified seeds, public health, use of lower quantity pesticides due to fewer investments producing a decreased yield and also economic policies. However, there is no consensus on what the main causes might be but most studies show suicide victims are motivated by more than one cause, on average three or more causes for committing suicide.