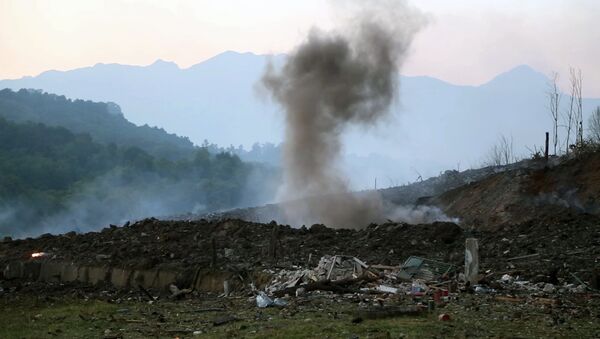 © Photo : Ministry of Emergency Situations of the Republic of Abkhazia
/
Go to the photo bank
Subscribe

A total of 64 people were injured in the munitions depot explosion in Abkhazia, republic's Health Minister Tamaz Tsakhnakia said Thursday.

Abkhazia Munitions Depot Blast Injures 60
SUKHUMI (Sputnik) – The explosion occurred in a depot located in the village of Primorskoye on Wednesday. Earlier in the day, the Health Ministry said that the incident left 60 people injured, including 27 Russian nationals. The Abkhazian Foreign Ministry also confirmed the deaths of two St. Petersburg residents.

"The state hospital received 17 patients out of [64 people who sustained injuries]. Eight of the injured people were hospitalized, the rest were sent home after receiving medical treatment," Tsakhnakia said at a briefing.

The rest of the victims were sent to hospitals in Gudauta, Gagra and Akhali Atoni. Three children are among those who were affected by the blast.