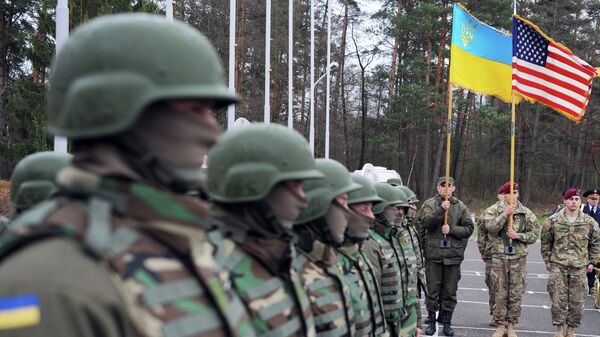 War is Peace: US Deploys New Form of Hybrid Aggression in Ukraine Against Russia
On Monday, the Wall Street Journal (WSJ) reported that the US defense and diplomatic establishment had devised a plan to supply lethal arms to Ukraine. The weapons, characterized as 'defensive', may include Javelin man-portable anti-tank missiles, anti-aircraft weapons, and other advanced arms.

The US Joint Chiefs of Staff and Defense Secretary James Mattis support the plan, and it now awaits the approval of President Trump, who has yet to be briefed on its details. Officials told WSJ that a final decision from the President could take as long as several months to secure.

Speaking to Sputnik, Russian military expert Leonid Ivashov recalled that "the delivery of anti-tank guided missiles to the Ukrainian army was a project endorsed by former US President Barack Obama and pushed by Republican Senator John McCain."

"When the issue of supplying lethal weapons was being decided, the main focus was on the anti-tank guided missile deliveries," Ivashov said, referring to Washington's allegations about Russian tanks ostensibly being in place in eastern Ukraine's Donbass region at the time.

Ukraine Hopes to Receive US Support in Settlement of Donbass Conflict
He pointed out that "the supply of the US anti-tank guided missiles to Ukraine may be followed by the delivery of other types of lethal weapons there."

At the same time, Ivashov said that the US arms supplies are just a small part of Kiev's process of upgrading and expanding its warchest.

"Right now, Ukraine is developing its military and industrial complex, which regularly supplies armored vehicles, tanks and helicopters [to the Ukrainian army]. In this vein, the country's army's armament mainly depends on the domestic defense industry," Ivashov said.

Thierry Mariani, a member of France's center-right Republicans party, told Sputnik on Tuesday that the US plan to supply Ukraine with weapons is "extremely dangerous" and that Ukrainian President Poroshenko may use these arms to wage a new war in Donbass to improve his approval rating in the run-up to the presidential election in the country.

"On Ukraine, we have to remember that the presidential election is approaching and President Poroshenko's situation is not so good. Poroshenko, who failed in his economic and anti-corruption reforms, will try to use a new war to win the election. Actually, I am afraid that we may witness a new war in Donbass next year. In this context, the US arms deliveries to Ukraine are extremely dangerous,” Mariani said.

If the war moves beyond its current relative stalemate, the consequences could prove especially deadly. The front lines of the conflict are less than 10 kilometers to the city of Donetsk, which had a pre-war population of nearly a million people. While hundreds of thousands have fled the conflict, the elderly and mobility-impaired haven't had this opportunity. 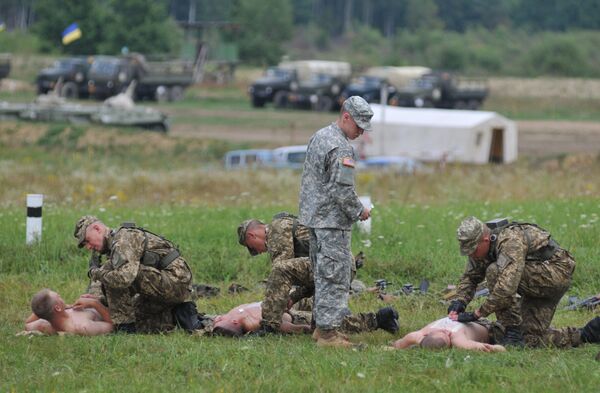 US serviceman teaches Ukrainian soldiers how to give emergency medical aid during the Rapid Trident/Saber Guardian 2015 military exercises at the International Peacekeeping and Security Centre base outside Lviv, Ukraine, Friday, July 24, 2015
© AP Photo / Pavlo Palamarchuk

Earlier, German President Frank-Walter Steinmeier described the arms supplies to the Ukrainian army as a very risky and counterproductive way out of the Ukraine crisis.

Chairman of the NATO Military Committee Peter Pavel, for his part, said that he did not see the need for the supply of lethal weapons to Kiev because it "will only increase the suffering of people."

US New Stage of Arms to Kiev Seeks to Balance Conflict, Endangers Minsk Accords
Ukraine has faced a civil war in the Donbass region since April 2014, when the government sent the army to try to crush an uprising in the country's southeast by locals who refused to recognize the coup-installed government in Kiev.

In February 2015, Kiev and the Donbass militias signed a ceasefire deal. Since then, both sides have accused one another of violating the deal, and Moscow has accused Kiev of deliberately stalling the implementation of its provisions to establish a lasting peace in the region.

Moscow has repeatedly warned against the delivery of US weapons to Ukraine, stressing that doing so would only escalate the deadly conflict.