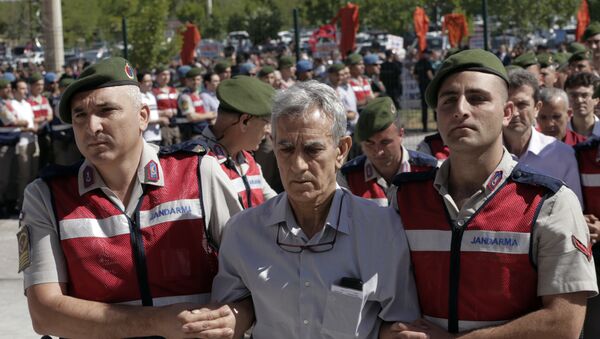 © AP Photo / Burhan Ozbilici
Subscribe
Almost 500 people arrested after last year's failed coup in Turkey have appeared in court accused of taking part in the plot. But what are the chances of them getting a fair trial and of the proceedings shedding light on who was really behind the coup?

A purpose-built courtroom has been built outside the capital, Ankara, for the trial of 486 people accused of taking part in the coup on the night of July 15/16 last year.

​The trial, which began on Tuesday (August 1), is focusing on events at the Akinci air base, which was the headquarters of the coup.

The handcuffed defendants were jeered as they were escorted into court.

"We want the death penalty!" chanted demonstrators, who threw nooses in the direction of the accused.

Kerim Balci, editor-in-chief of London-based Turkish Review, said he had "no hope" they would get a fair trial.

In June, Turkey's Prime Minister Binali Yildirim said the trials would comply with the law.

Around 249 civilians were killed during the coup, which collapsed after President Recep Tayyip Erdogan appeared on Facebook Live and urged people to come out onto the street to confront soldiers in Istanbul, Ankara and several other cities.

Alleged Gulenist K.Batmaz brought to Akinci coup trial in front of fmr Air Force comander, meaning he was the higher command during the coup pic.twitter.com/pgFQpcwR7z

​Planes took off from Akinci, which is just outside Ankara, to bomb the parliament building and the presidential palace.

In 2016, Mr. Yildirim said Akinci, which "nested the traitors" would be closed down.

The head of the army, General Hulusi Akar, was held hostage during the coup and has claimed the plotters offered to put him on the phone to Fethullah Gulen, a cleric who lives in exile in the United States. Mr. Gulen has been accused by Mr. Erdogan of having pulled the strings of the coup plotters.

But Mr. Balci, a former columnist with the Zaman newspaper, who fled to London before the coup after being "blacklisted" by Mr. Erdogan's government, said the Akinci trial needed to be televised.

"We believe the Turkish public and the whole world has the right to know what happened that night," he told Sputnik. 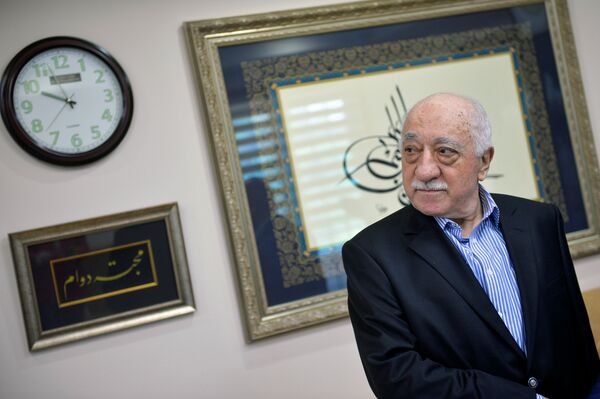 US based cleric Fethullah Gulen at his home in Saylorsburg, Pennsylvania, US July 29, 2016
© REUTERS / Charles Mostoller

"I want to know ‘was there really a coup?' and what sort of stupid Turkish soldiers they were, because the Turkish army never fails in coups, so I don't know how these people failed, whether they failed deliberately or not," Mr. Balci told Sputnik.

"We don't know who is lying and I am not saying the coup plotters are all trustworthy people. But even if they are truly coup plotters, they deserve a hearing and we deserve to know what they claim… I'm not saying these people are innocent, but I want to know why they did this and from whom did they receive the orders," he said.

"Something is going on there that the Turkish governing elite do not want us to learn, and I don't believe the case will be a fair trial, particularly given the fact that the Turkish president promised that it will be finalized by the end of the year," Mr. Balci added.

​"The Turkish president seems to be very confident about what the result will be, and he says they will rot in jail," Mr. Balci said.

Mr. Balci has himself been threatened with a life sentence in jail after he called on people not to follow Mr. Erdogan's instructions to go onto the streets on the night of the coup.

"A large segment of the accused people claim they received orders and were invited onto the street for anti-terror activities, and they didn't know it was a coup… We need to know who was there as a coup plotter and who was tricked into this," Mr. Balci told Sputnik.

He said there was no jury in the trial and the verdicts would be handed down by a panel of judges.

Hundreds of judges and prosecutors have been purged in the last year, along with dozens of journalists and academics accused of being linked to the plot or to Mr. Gulen.

"The judges will be loyal to Mr. Erdogan or they will face the consequences. There have been cases where judges, for example, released some of our journalist friends and the next morning the journalists were re-arrested and the judges were arrested also," Mr. Balci said.

"Whenever the prosecutors or the judges do not collaborate with the government and do not obey the orders coming from the minister of justice or the office of the president directly they pay the price," he told Sputnik.

Among those on trial are Akin Ozturk, who was the air force chief at the time of the coup, Gulenist theology lecturer Adil Oksuz and businessman Kemal Batmaz.

The 4,658-page indictment claims Mr. Gulen was "number one" in the coup attempt and Mr. Oksuz and Mr. Batmaz are named as his accomplices.

They were among 10 civilians at the Akinci air base on the night of the coup, say prosecutors.

Mr. Batmaz was seen in security camera footage walking through the base and receiving a military salute from an officer.