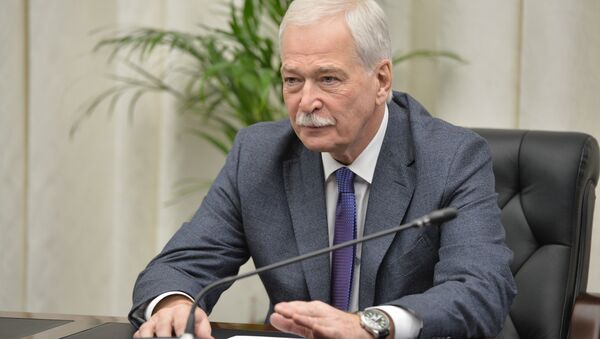 US Arms Supplies to Ukraine: Poroshenko May Escalate Donbass War to Win Election
MINSK (Sputnik) — Ukrainian President Petro Poroshenko signed on Tuesday a law on introducing amendments to the 2017 state budget, which provides for additional funding for the defense sector, including the construction of an ammunition factory, the purchase of Oplot tanks, and the production of missiles.

"The signing yesterday, August 1, by the Ukrainian president, of amendments to the budget, which increase military spending is an extremely alarming signal," Gryzlov told reporters, following a meeting of the Contact Group in the Belarusian capital, Minsk.

Gryzlov added that Kiev was intended to expand its allocations for manufacturing weaponry, tanks and missiles at the expense of restoring infrastructure and facilities in the conflict-torn areas.

"As far as I'm concerned, the amendments are aimed at allocating funds not just for defensive arms. Secondly, these amendments make you think about the priorities of the acting Ukrainian authorities," the Russian envoy said.

Gryzlov stressed that the Russian delegation once again insisted on decoupling militaries in Stanytsia Luhanska.

"At the same time, the position of the Russian side remains unchanged: the de-escalation in Donbas on the basis of Minsk accords is impossible without resolving political problems," Gryzlov added.

World
US Anti-Tank Missiles for Ukraine: Will It Just Be the Beginning?
The Donbass conflict erupted in April 2014 as a local counter-reaction to the West-sponsored Maidan coup in Kiev that had toppled President Viktor Yanukovych in February. Residents of the Donetsk and Lugansk regions held independence referendums and proclaimed the People's Republics of Donetsk and Lugansk. Kiev has since been conducting a military operation, encountering stiff local resistance.