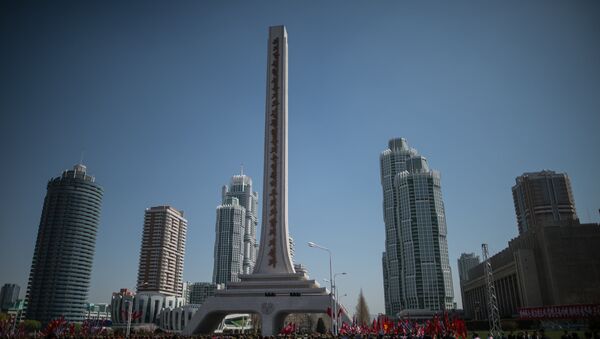 The sanctions against North Korea, Russia and Iran currently being discussed in the United States are not line with the interests of either Washington’s allies or rivals, a representative of the North Korean Foreign Ministry said.

US Anti-Chinese Sanctions Unlikely to Top Beijing’s Fears of N. Korea Collapse
MOSCOW (Sputnik) – A bill on new, sweeping sanctions against Pyongyang, Moscow and Tehran has been approved by both chambers of US Congress last week. On Monday, US Vice President Mike Pence confirmed that US President Donald Trump would sign the bill into law.

"The United States launched a campaign against several states with the only impudent goal to use them as a tool for promoting its own interests. The US sanctions, which are aimed at saving the US economy through ensuring the energy market and increasing the export, do not hesitate to encroach upon interests of its allies and friends, not only its rivals," the unnamed representative of the North Korean Foreign Ministry said, as quoted by the country’s embassy in Russia.

The official has said it is logical that the US "sanctions blackmail" is subject to criticism and condemnation around the international community.

"The world should not tolerate the disturbing behavior of the United States, which threatens sovereign states with sanctions whenever it wants in order to ensure its exceptional interests," the representative of the Foreign Ministry said.

According to the official, the United States launched its campaign against North Korea to support its political course implying a shift to the Asian-Pacific region as well as its desire to dominate over the whole world.

On Friday, following Congress’ approval of new sanctions, North Korea conducted their second test of an intercontinental ballistic missile in less than a month. According to the state-run Korean Central News Agency (KCNA), the test was successful, with the missile having reached an altitude of 3,725 kilometers (2,314 miles) and traveled 998 kilometers for about 47 minutes before falling into the Sea of Japan.

Following the missile launch, Trump condemned North Korea’s test, pointing out that the United States would take all necessary steps to defend its national security. US Secretary of State Rex Tillerson urged all countries to support stronger UN sanctions against North Korea.