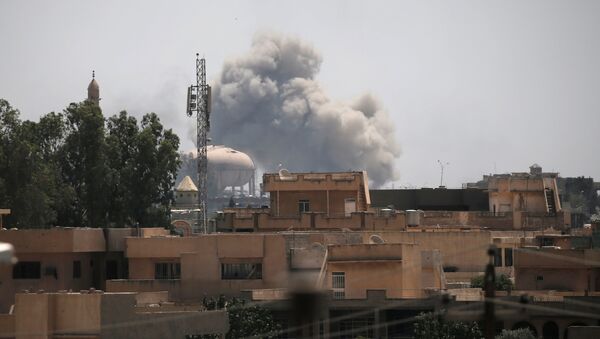 Iraqi Forces Launch Operation to Liberate Tal Afar From Daesh
MOSCOW (Sputnik) – The commander of the Islamic State (Daesh) terrorist group's training centers in the Iraqi northwester city of Tal Afar was killed Wednesday in an airstrike carried out by the Iraqi Air Force, the Iraqi army said.

Earlier in the day, Rudaw broadcaster reported, citing Chief of Staff for Iraqi Kurdistan's Peshmerga Ministry Jabar Yawar that the Iraqi military forces had launched an operation against Daesh to retake Tal Afar.

"One of the IS commanders, Abu Ismail, the head of IS militants training camps in Tal Afar, was killed as Iraqi Air Force bombed his headquarters," the Iraqi army posted on its Twitter.

On July 26, Iraqi Prime Minister Haider Abadi pledged to liberate both the city of Tal Afar in the Nineveh Province and Al-Hawija district in Kirkuk from the terrorist group in the same resolute manner in which the liberation of Iraq's Mosul was conducted.

Tal Afar, located 30 miles away from Mosul, is the last Daesh stronghold close to Iraq's border with Syria. The city is populated mainly by Iraqi Turkmens, who are Shiite Muslims, According to Iraqi military’s estimates, some 1,000 Daesh militants may be in the city.