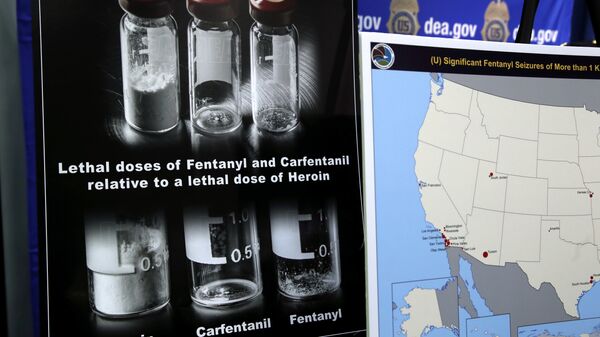 © AP Photo / Jacquelyn Martin
Subscribe
International
India
Africa
The National Crime Agency (NCA) says 60 deaths in the UK since December have been linked to fentanyl, an opioid which is 50 times stronger than heroin. Four men have been charged after allegedly using the Dark Web to purchase fentanyl.

The latest, Kyle Enos, 25, from Gwent in Wales, has been charged with importing, supplying and exporting class A drugs.

​Mr. Enos was arrested in May, and has been remanded in custody.

In April, three men were arrested and charged with conspiring to supply class A drugs after a raid on an industrial unit in Morley, near Leeds.

Fentanyl is a synthetic opioid and is far more powerful than heroin. The real danger of this drug is that users overestimate how much to take and dealers sell the drug under the pretense that it is something else.

It was developed in the 1960s, and is widely used medically for pain control and general anesthesia.

Fentanyl is 50 times stronger than heroin and 100 times more potent than morphine. As little as 0.002g of fentanyl can be fatal.

The National Crime Agency says 60 people have died in the UK in the past eight months after taking the painkilling drug Fentanyl.

Last year one Dark Web marketplace, Darknet Heroes League (DHL), banned sales of fentanyl, after a wave of deaths caused by the drug.

Several of the deaths happened in Hull, a town in east Yorkshire which has a long-running drug problem.

"Following the recent tragic overdose deaths, primarily in Yorkshire and the Humber early in the year, involving heroin mixed with fentanyl, PHE has been urgently investigating how widespread the problem is," said Pete Burkinshaw, Alcohol/Drug Treatment and Recovery Lead at Public Health England.

"We do not have a full picture, but the deaths in Yorkshire do appear to have peaked earlier in the year and fallen since our national alert and, encouragingly, our investigations in other parts of the country suggest we are not seeing the feared sharp increase in overdoses," he added.

The NCA has warned drug users to be vigilant as it appears some nefarious drug dealers are mixing heroin with fentanyl and carfentanyl.

"The threat of synthetic opioids is not new. However, since December 2016, we have seen a number of drug related deaths linked to fentanyl and carfentanyl," said Ian Cruxton, Deputy Director at the National Crime Agency.

"The NCA has been working with partners, both in the UK and overseas, to take action against those drug dealers who are playing Russian roulette with the lives of their customers by mixing synthetic opioids with heroin and other class A drugs," he said.