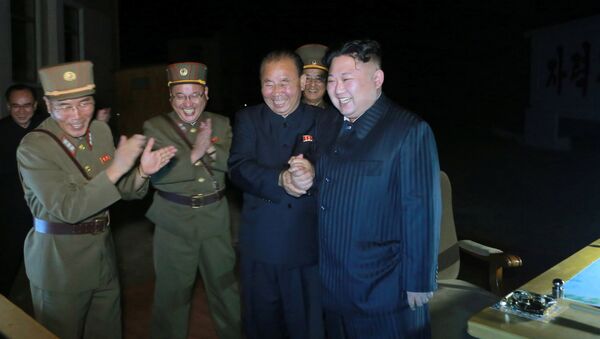 The North Korean authorities have changed how they conduct missile testing following media reports that US Special Forces had the opportunity to take out Kim Jong-un on July 4 and decided not to take the shot.

Instead of allowing Kim to stroll around the launch platform for more than an hour, in broad daylight, smoking cigarettes, as he did during the early July test, North Korea’s most recent test on July 28 was conducted in the dark of night and featured multiple Kim Jong-un doppelgängers on the platform, Business Insider reported.

​The change could have strategic implications. While the US tested its Terminal High Altitude Area Defense (THAAD) missile batteries following North Korea’s latest provocation, the much-beleaguered Ground-based Midcourse Defense (GMD) system has never been tested in the dark, according to Business Insider. The Government Accountability Office, for instance, reported in 2016 that "GMD flight testing, to date, was insufficient to demonstrate that an operationally useful defense capability exists."

The late night launch and the Kim impersonators weren’t the only changes Pyongyang made to its test procedures. "Reports are [the July 28 missile] was launched from an unusual location in the heart of the country that we’d never seen before," Jeffrey Lewis of the James Martin Center for Nonproliferation Studies at Middlebury College said this week on his podcast Arms Control Wonk.

"This looked more operational," Lewis added, noting that the adjusted launch tactics were "in response to stories that [the US] saw the missile 70 minutes prior to its launch."

Sputnik reported July 12 that US forces had a "very easy shot at killing Kim and didn’t."

Since the start of 2017, the North Korean military has tested 18 missiles over 12 tests.