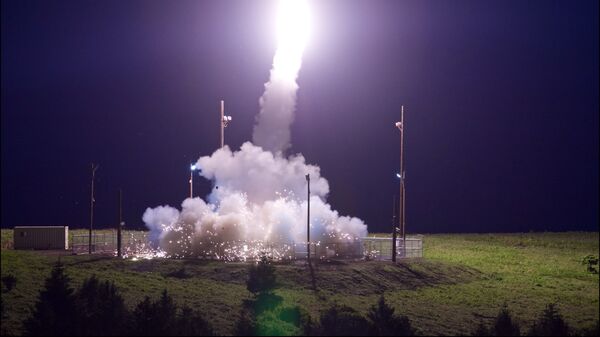 © Missile Defense Agency
Subscribe
International
India
Africa
Beijing has made no secret of its displeasure with South Korea’s deployment of the American-made Terminal High Altitude Area Defense (THAAD) system - and now that the deployment has resumed, China may seek to retaliate against Seoul.

When liberal South Korean President Moon Jae-in took office in May, Chinese leadership likely breathed a sigh of relief, as he announced a forestalling of the THAAD deployment for up to 15 months while the South Korean government undertook an environmental impact analysis of the system. Two of the six platforms had already been rolled out and Moon lacked the authority to suspend or dismantle them — but he could stall for time on the rest.

But after North Korea tested what many are calling an intercontinental ballistic missile on Friday, July 28, Moon changed his mind and gave the US the go-ahead to continue the THAAD roll-out by installing the four other platforms. Beijing responded by summoning South Korean Ambassador to China Kim Jang-Soo to protest Seoul's decision.

"The Chinese Foreign Ministry, ahead of protesting North Korea's missile launch, summoned Ambassador Kim right after South Korea announced the deployment of the THAAD launchers, as if they had been on standby," an anonymous source told Korean newspaper JoonAng Ilbo. "This demonstrates what China prioritizes."

"Chinese experts warned that the diplomatic and economic relations between China and South Korea will suffer long-term damage if the latter insisted on deploying the …THAAD missile defense program regardless of China's strong opposition," read a Tuesday article on the Chinese government-owned Global Times.

But if Korea has been deterred by the Chinese protests, they aren't showing it: THAAD is being rolled out with all due haste. "We are certainly ready to bring additional pieces in as quickly as we can," Pentagon spokesman Navy Capt. Jeff Davis told reporters on Monday. He reminded reporters that the THAAD is "strictly a defensive weapon system," with the purpose of "intercepting ballistic missiles inside or outside the atmosphere during their final, or terminal, phase of flight."

"Our commitment to the defense of our allies, [South] Korea and Japan, in the face of these threats, remains ironclad," he added. Over the weekend, the Pentagon deployed nuclear-capable bombers to the Korean Peninsula in order to increase pressure on the North.

The Korean Crisis has had geopolitical ramifications that go much further than the Peninsula. For instance, the issue has also become a centerpiece of Chinese/American relations. "I am very disappointed in China," US President Donald Trump wrote on Twitter on Saturday. "Our foolish past leaders have allowed them to make hundreds of billions of dollars a year in trade, yet they do NOTHING for us with North Korea, just talk."

Qian Keming, Chinese vice minister of commerce, chastised Trump for his Twitter comments. "We believe that the North Korea nuclear issue and China-US trade are two issues that are in two completely different domains," Qian said at a press briefing Monday. The issues "are not related, and should not be discussed together," he said.

Some experts have even argued that the North Korean conflict is simply a proxy for the US and China to lock horns over. "The military option the Americans are threatening won't likely happen because the stakes will be too high," said Liu Ming, director of the Korean Peninsula Research Center at the Shanghai Academy of Social Sciences, to the Boston Globe. "It's a pretext and an excuse to pile up pressure on China. It's more like blackmail than a realistic option."