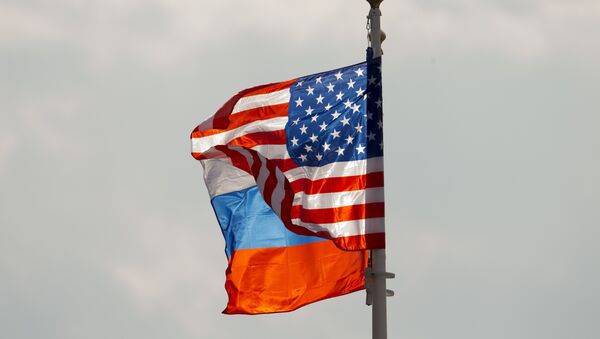 © AP Photo / Ivan Sekretarev
Subscribe
Former US Air Force Lieutenant Colonel and Pentagon analyst Karen Kwiatkowski said that US leaders and the special interests that financed them were increasingly alarmed as Russia and Iran developed independent energy economies that could provide what nations needed outside Wall Street and Washington control.

Last week, the US Senate overwhelmingly approved a bill, earlier passed by the House of Representatives, on new sanctions against Iran, North Korea and Russia. The bill is also designed to limit Trump’s ability to lift sanctions against Russia. Monday Pence said that the president would sign the bill into law "very soon".

"This bill, like much of the US foreign policy, is fundamentally about a military-supported petrodollar economy that is shifting from a Middle East orientation to one that relates to US energy exports and development," Kwiatkowski stated.

EU Ready to Take 'Retaliatory Countermeasures' Against US Over Russian Sanctions
The bill also states that it is the US policy to secure Ukrainian energy dependence, to promote a non-Russian energy sources throughout western Europe, and forces the National Security Council to include the Secretary of the Treasury, Kwiatkowski observed.

US leaders and the special interests that financed them were increasingly alarmed as Russia and Iran developed independent energy economies that could provide what nations needed outside Wall Street and Washington control, Kwiatkowski explained.

"As Russia and Iran specifically grow their own energy sectors without the benefit of reliance of the US currency and debt, the fundamental financial security of the highly indebted and demographically challenged United States is indeed at risk," she said.

The language used in the sanctions bill and the across the board support for it regardless of their political ideology or party revealed the big business determination to punish and isolate Russia, Kwiatkowski remarked.

"The nature of the language aimed directly at President Trump indicates a great deal of fear among the lobbyists who backed the bill," Kwiatkowski said. This kind of massive support bi-partisan support of any legislation indicates powerful industry lobbying and pressures by leadership on both parties,"

German Economy Minister Says Proposed US Anti-Russia Sanctions Violate Int'l Law
While President Trump has not yet been entirely successful in implementing his campaign promises of a noninterventionist foreign policy, he has had enough success so far that he has panicked the military industrial-congressional complex, Kwiatkowski maintained.

"We see this clearly in the lack of debate, the rapidity of processing and the language of this bill," she said.

Members of Congress appeared to not worry or care that the US Air Force’s current ability to continue launching, military satellites depended on the continued readiness of Russian companies and the Moscow government to allow it to buy RB-180 rocket engines, Kwiatkowski added.

"Interestingly, the Congress saw fit to exempt NASA [National Aeronautics and Space Administration] from the sanction regime, and assumes that Russia will continue to happily support NASA expenditures and activities in their supported space launches," she said.

The bill had also been pushed through as a panic-driven measure to try and block Trump’s sincere efforts to improve relations with Russia, Kwiatkowski maintained.

Moscow Expels US Diplomats Swiftly Given Anti-Russia Sanctions 'Veto Proof'
However, Kwiatkowski remained optimistic that US-Russian relations would not now deteriorate into an out of control retaliatory spiral.

"Foreign policy is a game, and the game will go on," she said. "However, the growing complexity and richness of non-US economic and military alliances around the world will continue to grow to provide the balance, predictability and hopefully the peace that all nations seek."

Trump had repeatedly shown he genuinely wanted a non-interventionist US foreign policy: Therefore the special interests were trying to lock him into being forced to accept the continuation of interventionist and abrasive policies, Kwiatkowski said.