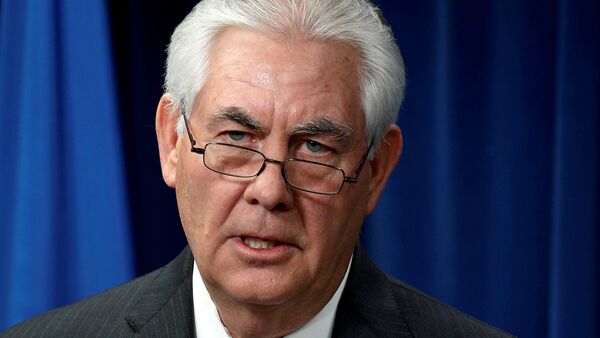 Tillerson said neither he nor Donald Trump were happy about the Congress' decision to approve sanctions against Russia.

US Sanctions Bill May Trigger 'Diplomatic Deadlock' in Relations With Russia
WASHINGTON (Sputnik) — US Secretary of State Rex Tillerson said neither he nor US President Donald Trump were happy about the Congress' decision to approve sanctions against Russia, but added that this was the decision the legislature took and it would have to be accepted.

"The action by the Congress to put these sanctions in place and the way they did, neither the president nor I were very happy about that. We were clear that we didn't think it was going to be helpful to our efforts, but that's the decision they made, they made it in a very overwhelming way. I think the president accepts that, and all indications are he will sign that bill and then we'll just work with it…. We can't let it take us off track of trying to restore the relationship," Tillerson told reporters at a State Department press briefing.

Tillerson said that Moscow had to respond to the diplomatic seizure by the United States in December but their delayed response made life difficult.

"In terms of their response to that action I think it’s important to recognize that any leader of any country has their whole population watching them as well. And President Putin has his population in Russia watching him," Tillerson said. "I think the fact that they felt the need to take symmetrical action, and that’s the way they view this, they were delayed in taking this action."

Tillerson also said that he would meet Russian Foreign Minister Sergei Lavrov this weekend in Manila.

"I will be meeting face-to-face with Foreign Minister Lavrov this weekend, on the margins of the meetings in Manila," Tillerson said. "He and I have already spoken."

Tillerson characterized their conversation as "professional" following the US Congress' move to strengthen sanctions against Russia and Moscow’s response to reduce the number of US embassy workers in Russia, adding the he thinks Lavrov is "as committed as I am to trying to find ways to bring this relationship back closer to one another."