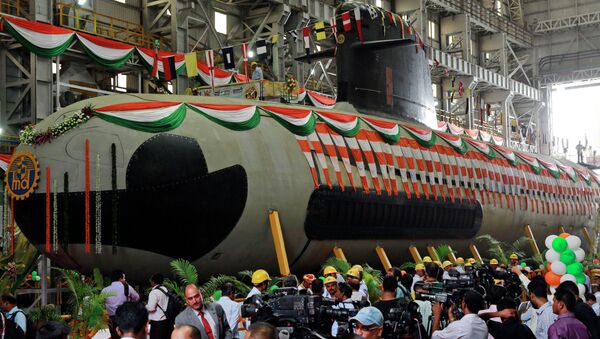 © AP Photo / Rafiq Maqbool
Subscribe
International
India
Africa
India is seeking to have six non-nuclear submarines built as part of a $12 billion defense program, and has sent a request for information to six foreign shipyards asking if they could fill that order.

France, Germany, Russia Japan and other nations were asked whether they had the capacity to build vessels equipped with air-independent-propulsion systems, which could replace diesel-electric systems by allowing the submarines to operate without access to atmospheric oxygen.

Business Insider reported that New Delhi will send out a formal request for a proposal after receiving a response from interested parties, then create a shortlist of three or four shipyards from that group.

India’s Strategic Partner policy dictates that a domestic shipyard must compete for a contract with a foreign one  - that, along with others factors, will stretch this process out over a couple years, with one analyst estimating that it could take "a good seven to eight years after a deal is signed" before the first  P75I program sub is brought online.

The interest in these vessels comes as India continues to keep an eye on China’s growing presence through the narrow Malacca Strait and in the Indian Ocean, which it has been tracking since 2013.

A US Defense Department report noted in 2015 that missile and attack submarines from Beijing had been operating in those waters, and China claims that it’s only in the Indian emergency missions, anti-piracy patrols, humanitarian aid and other non-military operations.

With 50,000 ships passing through each year, the the 550-mile-long Malacca Strait has become a popular area for pirates.

In May, one source involved with Indian defense said, "The pretext is anti-piracy patrols in the Gulf of Aden … But what role can submarines play against pirates and their [ships]?"