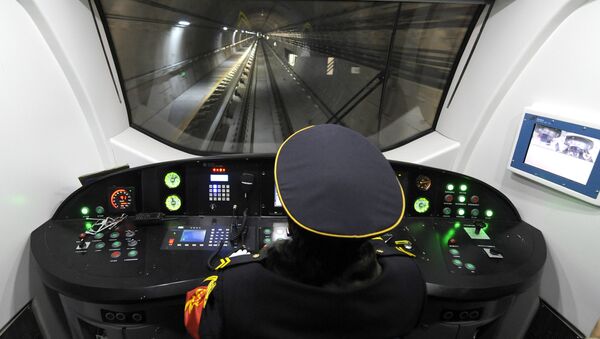 Chinese workers are building the world's deepest and Asia's largest underground high-speed railway station beneath the Great Wall at the Badaling section in Beijing.

The station under construction will be 3-story high and have a 36,000 square meters floor area, including platform, entrance and exit. The railway tracks will be 102 meters underground.

The station is an important part of a 12.01 kilometers long tunnel section of the 174-kilometer Beijing–Zhangjiakou high-speed railway line. The tunnel is the longest one of the railway line.

"Passengers will enter and exit the station about 100 meters underground, and it will be very safe," said Dai Longzhen, a senior manager of the construction company China Railway No 5 Engineering Group Co Ltd.

China's Lightning Fast Fuxing Train Poses Challenge to Western Rivals
An escalator would raise passengers 62 meters at vertical height, and inclined elevators will also be used in the station for the first time.

To secure the safety of passengers, the station will change the inclined shafts that are used to build the station as permanent rescue channels.

The underground burrowing work is the country's most complicated, because the station has to contain 78 caverns and lots of intersections, said Chen Bin, a commander-in-chief of the project.

Starting from the construction of the tunnel on April 15, 2016, workers have known how tough the work will be, however the hardness of the rocks still exceeded their expectations, said Jiang Si, a manager of the company.

China's Homemade High-Speed Suspended Monorail Train Imminent
Large–size shield tunneling machines could not be used, and workers could only use the blasting method in the construction, Dai said.

Workers have to develop new blasting technology to explore the tunnel carefully, because just above it are the Great Wall and the railway line linking Beijing and Zhangjiakou first independently designed and built by Chinese 100 years ago.

Workers have carried out more than 4,500 explosions. They use the electronic detonators to control the vibrations in batches of small explosions to reduce the impacts on the inside of hills and the Great Wall. At the Qinglongqiao station of old Beijing-Zhangjiakou railway line, worker used expansive agents to dig the tunnel, only 4 meters beneath.

Windstorm Disrupts Train Service in Northwestern China
Another problem in the tunneling is the underground water, and every day, workers have to pump at least 19,000 cubic meters of water, which equals about 10 swimming pools.

The Bejing-Zhangjiakou high-speed railway is expected to get through by the end of 2019, allowing passengers to travel between the two cities in one hour. It is an important project for the 2022 Winter Olympic Games.

This article, written by Guo Kai, was originally published in China Daily.