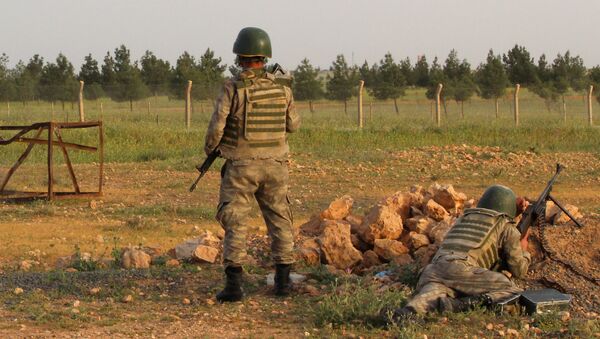 © REUTERS / Kadir Celikcan
Subscribe
International
India
Africa
A group of Turkish soldiers has been detained on suspicions of assaulting and berating a quartet of young Syrians who attempted to illegally cross the border to Turkey.

The incident attracted outrage online when unverified video footage surfaced showing four Turkish soldiers attacking the Syrian youths. The incident, which took place on Friday, July 28 according to the Turkish military, was allegedly filmed by one of the soldiers.

The Syrians don't reply to the soldiers' questions, as one Turk asks "Why did you bring the refugees in? Are you a smuggler?"

The video ends with footage of a Turkish soldier repeatedly kicking a Syrian, throwing him to the ground and repeatedly hitting him while he's down.

The soldier that filmed the footage allegedly sent it to a friend in Germany, whereupon it was leaked online.

The Turkish military has reprimanded the four soldiers in the video. "The personnel in question were taken into custody and all administrative and judicial procedures have been immediately started against them," they said in a statement on Sunday.

The Syrians were medically cleared and then deported back to Syria, the statement added. However, frictions between Turkey and Germany also showed in the military's statement, as they added that the footage leak was "an act carried out deliberately to weaken and harm Turkey and the Turkish Armed Forces."

Over the last six years of fighting, the Syrian civil war has created between 5 and 6.3 million refugees. Turkey has accepted the lion's share of these refugees — between 2.9 and 3.1 million of them.

Over 90 percent of the refugees live in Turkish cities, and tensions continue to grow between the refugees and the Turkish majority. In June, Amnesty International accused Turkish border guards of opening fire on Syrian refugees attempting to enter the country. Amnesty claimed that at least eight people were killed in the incident, but Turkey denied the charges.