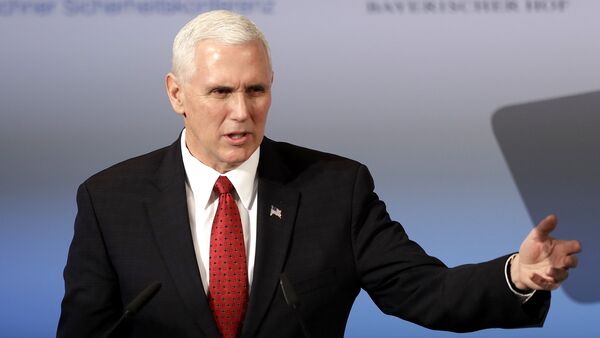 TALLINN (Sputnik) — Pence on Monday accused Russia of alleged aggression toward the Baltic states and expressed the United States’ readiness to protect the countries under its NATO commitments.

"No threat looms larger in the Baltic states than the spectrum of aggression from your predictable neighbor from the east [Russia]. At this very moment, Russia continues to redraw international borders by force, undermine democracies of sovereign nations and divide the free nations of Europe one against another," Pence said during the joint press conference with presidents Kersti Kaljulaid of Estonia, Raimonds Vejonis of Latvia, and Dalia Grybauskaite of Lithuania in Tallinn.

The US vice president also praised Estonia for meeting the target of spending 2 percent of its gross domestic product for NATO's military expense and noted the striving of Latvia and Lithuania to meet this goal by 2018.

"We know that strong and united NATO is more necessary today than at any point since the collapse of communism a quarter century ago," Pence pointed out.

Russia, China Vessels Train Assistance Amid Joint Sea Drills – Baltic Navy
As part of his two-day visit to Estonia, Pence met with the country’s servicemen and NATO troops deployed in Estonia, accompanied by the Baltic countries‘ presidents, Estonian Prime Minister Juri Ratas and Commander of the country’s Defense Forces Gen. Riho Terras. Pence was informed by the officials about the activities of NATO troops and thanked the servicemen for protecting the common values.

Moscow has repeatedly said that Russia had never planned to attack any NATO member. According to the statement of Russia's Foreign Minister Sergey Lavrov of June 2016, NATO recognizes this but uses the pretext of alleged Russian aggression to deploy more equipment and battalions next to Russian borders.