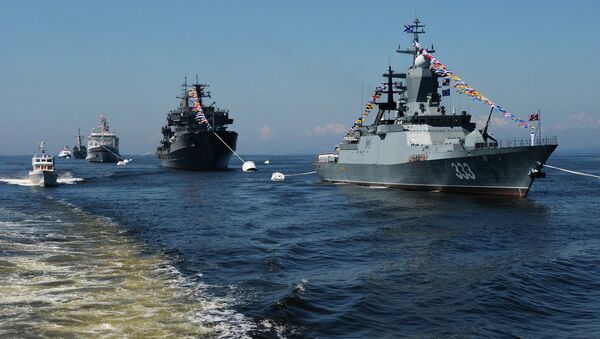 Right ahead of Russia's Navy Day celebrations scheduled for July 30, the Sovershenny, the newest class of corvettes, entered service with the country's Pacific Fleet. This warship will add significantly to the Russian Navy's combat capability, a Russian military expert told Sputnik.

Russia
Russia's Navy Day: History of Glory and Heroism
According to Vladimir Matveev, head of the of the Russian Eastern Military District's press service for the country's Pacific Fleet, a ceremonial lifting of Russia's naval flag on board the newest Russian corvette Sovershenny took place in the Far Eastern city of Vladivostok.

"The warship has been put on service with the Russian Pacific Fleet," Matveyev said, citing a relevant order by the Russian Navy's Commander-in-Chief.

Laid down at the Amur Shipyard in 2006 and launched in 2015, the Sovershenny (Consummate) is the fifth Steregushchy (Vigilant) class, Project 20380 corvette to be commissioned into the Russian Navy, and the first to join the Pacific Fleet. 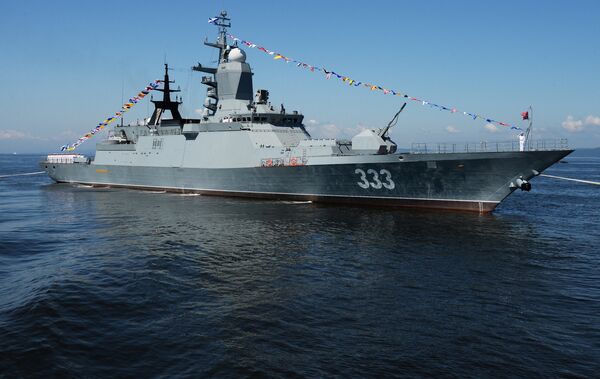 The Sovershenny corvette during a general rehearsal of a parade of ships and a military sport event devoted to the Navy Day in Vladivostok. File photo
© Sputnik / Vitaliy Ankov
/
Go to the photo bank

"The Sovershenny's tactical and technical characteristics indicate that this is a very serious weapon in which our military and industrial complex has invested everything he could give to a ship of such class in terms of engines, navigation and armament,"  he said.

According to him, "it is difficult to name a type of similar weapons on foreign ships which the Sovershenny does not have on board."

"This corvette will strengthen the Pacific Fleet and help it perform its tasks more intensively. This newest weapon will add serious 'muscles' to our fleet," Baranets concluded.

Earlier, he told Sputnik that the corvette's armament is "very decent for a ship of this class."

He said that "while in service with the Pacific Fleet, the Sovershenny will deal with many tasks related to patrolling, fighting enemy surface ships and submarines, as well as the destruction of enemy cruise missiles."

The corvette's main armament consists of eight Uran-U launchers with Kh-35 anti-ship missiles, each armed with a 145 kg fragmentation warhead powerful enough to blow a destroyer or any other smaller ship out of the water up to 260 kilometers (161 miles) away.

Russian Navy May Receive Next-Gen Corvette With Kalibr Missiles Before 2018
The Sovershenny's defensive armament is equally impressive featuring the Redut air-defense missile system with a range of up to 150 kilometers (about 93 miles), an A-190 100 mm cannon and a quartet of Paket-NK 330 mm torpedoes.