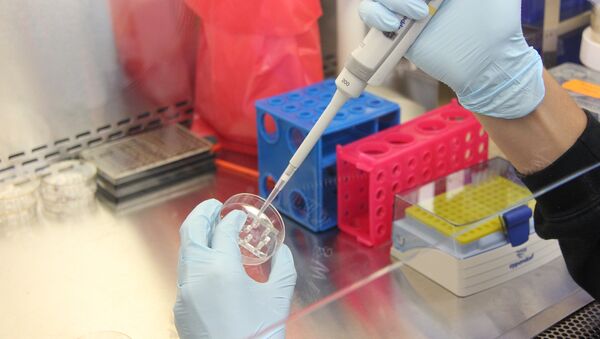 The United States Air Force has placed a tender to acquire samples of ribonucleic acid (RNA) and synovial fluid from Russians, according to the Federal Business Opportunities website.

"All Normal Human Fresh Frozen (FF) Synovial Tissue and Normal Human Ribonucleic Acid (RNA) samples must be Russian / Caucasian origin. All FF Synovial tissue and RNA samples must come from normal donors, who have no musculoskeletal injuries. This shall be confirmed by pathology," the contract reads.

The samples must be delivered to the Lackland Air Force Base near San Antonio, Texas, within 10 days after the contractor receives the money.

Later, a change was made to the contract specifications: "All samples (Synovial tissue and RNA samples) shall be collected from Russia and must be Caucasian. The Government will not consider tissue samples from Ukraine."

In his op-ed, RIA Novosti commentator Alexander Khrolenko suggested that the contract might be related to the development and testing of biological weapons.

"The US has a powerful nuclear arsenal. But even a small-scope nuclear conflict would backfire at the Pentagon. As for biological warfare, it is effective and doesn’t lead to the destruction of economic infrastructure. In theory, a targeted epidemic could be a very powerful weapon," Khrolenko wrote.

World
What's Cooking? The Alarming Rise of US Bio-Defense Labs on Russia's Borders
According to Khrolenko, the US runs a network of biological weapons laboratories in post-Soviet countries, including in Georgia, Ukraine, Kazakhstan and Azerbaijan. He suggested that these facilities might potentially be used for the possible development of a new biological weapon.

For example, back in 2015, the Russian Defense Ministry said that one such facility is the US Richard G. Lugar Public Health Research Center in Tbilisi, which is actually a high level biological research laboratory overseen by the US Defense Threat Reduction Agency.

There is another smaller US-controlled lab at a military base in the town of Otar in western Kazakhstan on the Caspian Sea.

Media reported that in 2013 in Ukraine, the US allegedly created laboratories in Vinnytsia, Ternopil, Uzhhorod, Kiev, Dnepropetrovsk, Simferopol, Kherson, Lviv and Lugansk.

In turn, Russia insists that the agreement must be fully implemented. Moscow has repeatedly called on Washington to provide security guarantees of its military-biological programs.

Russian military expert Igor Nikulin also suggested that the US might be developing biological weapons.

At the same time, specialists in genetic and biological studies stressed that the tender does not relate to the development of biological weapons and is very likely to serve a scientific purpose.

"The more you know about the genetic diversity of people, the more opportunities you have, in particular, to treat and diagnose diseases," Konstantin Severinov, professor at the Skolkovo Institute of Science and Technology (Scoltech) and Rutgers University, told RT.

Science & Tech
The Secret of Junk DNA: Study Confirms Human Genome is 'Product of Evolution'
"All people are different. The reasons why genetic differences are responsible for some other differences between people are still not known and are the subject of scientific research," he added.

Sergei Kiselev, director of the laboratory of the Vavilov Institute of General Genetics at the Russian Academy of Sciences, pointed out that the number of samples specified in the contract would be enough for a scientific study.

"A dozen RNA samples are normal to make the conclusion that this set of RNA is specific for this type of cells. It is also usually enough to identify deviations. Even if the military was interested in this there should be a very specific research purpose," Kiselev said.

Genetic scientist Valery Ilyinsky echoed Kiselev, saying that the samples will be used for fundamental studies.

"There are a lot of methods to analyze RNA and there is a variety of such studies. It’s difficult to say which one will be conducted," the scientist said.