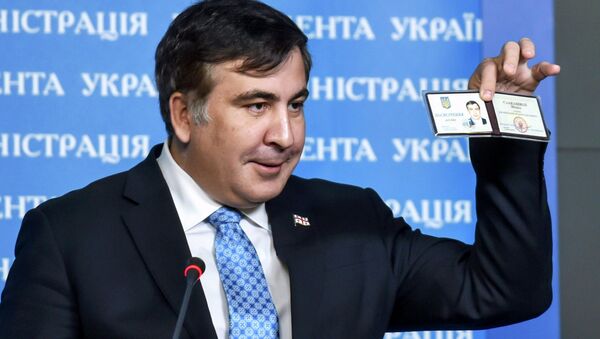 Ex-Georgian president and the former governor of Ukraine's Odessa region Mikheil Saakashvili said on Saturday, he considers himself a Ukrainian citizen and does not plan to seek asylum or take up citizenship of any other country.

Saakashvili Accuses Poroshenko of Aiming to Keep Corrupt Elite in Power
TBILISI (Sputnik) — Ukrainian President Petro Poroshenko deprived Saakashvili of Ukrainian citizenship on Wednesday, when it was discovered that the latter had violated Ukrainian law by providing incorrect information on his citizenship application. On Friday, Lithuania's member of the European Parliament Petras Austrevicius proposed to consider the possibility to provide Saakashvili with the citizenship of the Baltic nation.

"I have neither a plan nor a wish to do so and I do not plan to take any steps toward it [requesting political asylum or taking up another citizenship]. Poroshenko’s decision was an illegal step of a scared man, he violated the constitution of Ukraine and its international commitments. I am a citizen of Ukraine regardless of what documents were signed," Saakashvili said in an interview with the Rustavi 2 channel.

Saakashvili left Georgia in November 2013, after Giorgi Margvelashvili became the country's president. In July 2014, the prosecutor's office in Georgia pressed criminal charges against the ex-president, accusing him of embezzling $5 million from the state coffers to use for personal purposes. In 2015, Saakashvili was stripped of his Georgian citizenship after receiving a Ukrainian passport.