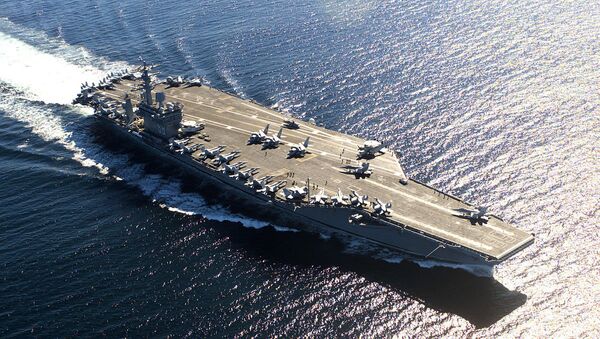 MOSCOW (Sputnik) — US aircraft carrier Nimitz and an accompanying warship approached Iranian military vessels on Friday at 4 p.m. local time (11:30 GMT) dispatching a helicopter, which flew near the vessels, the statement read.

"In a provocative and unprofessional action, the Americans fired flares to warn the Zolfaqar flotilla vessels," the statement of Iran's Islamic Revolutionary Guard Corps (IRGC) read as quoted by the Tasnim news agency.

'Inexcusable Losses': US Continues 'Provoking' Iran, but Does It Risk a War?
The Iranian military noted that the incident took place just few days after another US ship fired warning shots at Iranian vessels in the Persian Gulf.

Earlier this week, the USS Thunderbolt patrol ship fired several warning shots at an Iranian Revolutionary Guard Corps ship in the Gulf. The Iranian boat sailed within 150 yards of US ships on Tuesday, according to the US Navy.

The Iranian Navy said the US ship "fired two warning shots into the air with the aim of provocation and intimidation."

Iran's Elite Corps Commander Delivers Ultimatum to US
Earlier in July, the commander of the ICGC, Maj. Gen. Mohammad Ali Jafari, delivered an ultimatum to the US amid new anti-Tehran sanctions. He advised Washington to dismantle its regional bases within a range of 1000 kilometers (621 miles) from Iran's borders, if Washington plans to continue the policy of sanctions.

Jafari's comments come a day after the US departments of State and Treasury imposed sanctions against 18 entities and individuals tied to the Iranian military, IRGC and the country’s ballistic missile program.

The incident is one of many times when US' and Iranian maritime forces have come dangerously near conflict and likely will not be the last. In June, Iranian lasers targeted a US Super Stallion chopper near the Strait of Hormuz. Max Abrahms from Council of Foreign Relations told Sputnik last week that he "foresee[s] bilateral tensions rising" between Washington and Tehran.