'Marawi Should Be a Wake-Up Call': USPACOM Head Warns of Daesh Migration to Asia 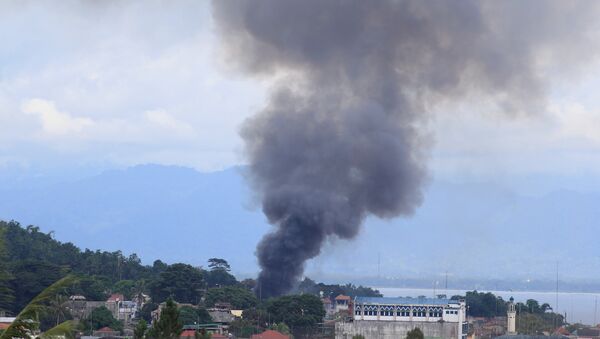 Though Daesh is slowly being crushed in the Middle East, the fight against the terrorist group and its ideology is not over: it's just moving to the Pacific, the head of US forces in the Pacific said Friday.

Speaking at the Japan-US Military Statesmen Forum in Washington, DC, head of US Pacific Command Navy Adm. Harry Harris said Daesh's spread to the Philippines is one of the three major threats the region faces (the others being China's military buildup in the South China Sea and North Korea's continued military development).

The violent occupation of the Filipino city of Marawi in May by Daesh-affiliated terrorist groups should be a wake-call that the Pacific faces a new threat, Harris stated.

"These terrorists [with the Maute and Abu Sayyaf groups] are using combat tactics that we've seen in the Middle East… it's the first time [Daesh]-inspired forces have banded together to fight on this kind of scale in this region," he said.

"So it's clear that foreign fighters are passing their ideology, resources and methods to local home-grown next-generation radicals," he continued. "Marawi should be a wake-up call and a rallying cry for every nation in the Indo-Asia Pacific region."

The battle for Marawi, which is ongoing, has so far claimed nearly 650 lives, according to EFE, with more than 470 terrorist combatants killed, 114 soldiers and 45 civilians. Dozens more displaced civilians have died from disease.

As Daesh and other terrorist groups are pushed out of their home territory in the Middle East and North Africa by coalition efforts there, they will shift to other parts of the world, Harris warned, Military.com reports.

And it won't be long before their presence is felt. He pointed out that Isnilon Hapilon, a former leader of the Abu Sayyaf Islamist group, was named "Emir to all Islamic State Forces in the Philippines" by Daesh in April 2016. A year later, Abu Sayyaf and Maute were strong enough, bold enough and well enough armed and trained to put up a bloody fight against the armed forces of the Philippines for control of an entire city.

"We were all reminded that [Daesh] is a truly global threat," Harris said.

As a global threat, it will require a global response, the admiral advised. He pointed to the US' ongoing support for the military of the Philippines and the recent delivery of two surveillance planes to the country to help spot terrorist group. He also advised that Japan, Australia, India and the US should maintain their cooperative military training regimes.

"Only through multilateral and multinational cooperation can we eradicate [Daesh] and other violent extremist organizations before they spread," Harris said.