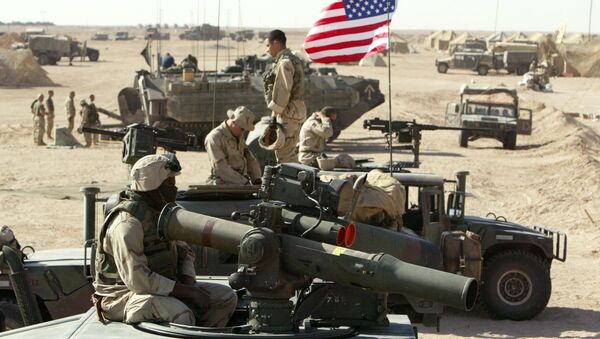 © AFP 2021 / JACK GUEZ
Subscribe
The US obsession with regime change in many countries leads to supporting fierce groups that become uncontrollable and carry out atrocities against innocent civilians and defenseless prisoners, former military lawyer Todd Pierce told Sputnik on Friday.

"What has been wrong is the US motive for supporting any group which promises to subvert [President Bashar] Assad in Syria, or similar groups in other countries, such as Libya," former military lawyer Todd Pierce said.

Pierce said the problem lay in the US determination to focus on toppling governments they had targeted and using any forces they could recruit with no concern about the kind of people they were or the way they operated.

When the US government accused governments of being inherently evil it then invariably used the most extreme and violent means being used to overthrow them. Then millions of people were usually caught in the anarchy, chaos and civil wars that followed Pierce observed.

‘Merciless Blow’: North Korea Vows Nuclear Strike if US Attempts Regime Change
These were the consequences of focusing on "simply regime change no matter how much chaos in the form of death and injury and society it may cause, and in total disregard of the humanitarian catastrophe it creates," he explained.

US policies of regime change across the Middle East had toppled governments in such countries as Iraq and Libya and set off a major civil war in Syria, triggering the flight of millions of refugees into Europe, Pierce pointed out.

"This catastrophe has been most visible in the overflow of humanity from the Mideast to Europe as people have a need to escape the murderous wars the US has conspired to create in the Mideast," he said.

The massive quantities of US government official and secret documents released to the public through WikiLeaks had provided massive documentation for the proactive, hands-on roll that the US government and its agencies had b played in these disastrous developments, Pierce recalled.

The US role in destabilizing and toppling governments was "evidenced in what has been released by WikiLeaks and what we can see with our own eyes," Pierce remarked.

The Human Rights Watch allegation followed reports last week that President Donald Trump has decided to end the half a billion dollar per year CIA training problem for Syrian opposition groups seeking to topple the government of President Bashar Assad.