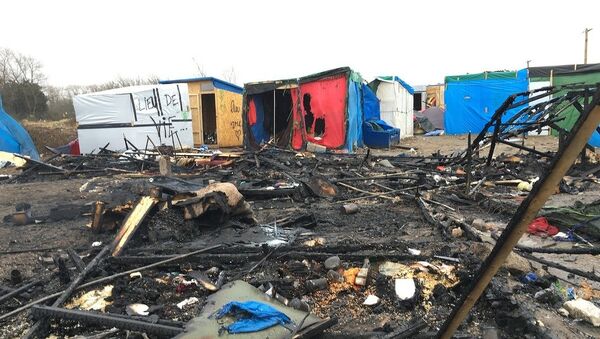 Bad treatment of refugees in the French city of Calais, including police violence against them, will not deter new arrivals, while the policy of hospitality could improve life of both city inhabitants and refugees, experts told Sputnik.

UK Unaware of Whereabouts of at Least 100 Child Refugees Smuggled From Calais
PARIS (Sputnik) — On Tuesday, the Human Rights Watch (HRW) non-government humanitarian organization issued a report detailing violent actions of the police against the migrants in Calais and the dismal conditions in which the latter had to live following the demolition of the so-called "Jungle" camp.

According to Nathanael Caillaux, a coordinator at Plateforme de Services aux Migrants (PSM) organization, about a hundred people returned to Calais in December and January, and the number of people who come back after having tried to go to the United Kingdom and failed continues to increase.

"The authorities are looking to implement the strict policy, trying to prevent people from coming, being less hospitable and welcoming. For these reasons the law enforcement has been used constantly trying to push people out. We have numerous testimonies of the people who are being pepper-sprayed at night, with the food distribution being hampered regularly. Police tries to prevent the associations to help the refugees, to wreck the food distribution, sometimes using pepper-spray," Caillaux told Sputnik.

Caillaux added that the police violence has been a problem in Calais for years, but it has intensified recently.

"Since the return of those immigrants to Calais there was fortified police presence and constant harassment. We regularly hear it, and we can see to ourselves this augmented police presence during the food distribution and confronting the volunteers on the ground," Caillaux said.

Refugees Must Leave Calais Camp by Late Tuesday - Reports
Catherine Wihtol De Wenden, a researcher specializing in migration at Paris Institute of Political Studies said she was not surprised by the HRW report.

"The current interior minister [Gerard Collomb] is very deterrent regarding the migrants and the refugees. So there is a very harsh policy, which he carried out already in Paris (next to Stalingrad metro station) and which is underway in Calais now. He certainly doesn’t want the 'Jungle,' which was destroyed, to emerge again. But the new jungle will appear again anyway," de Wenden told Sputnik.

Caillaux said that the policy of inhospitality threatened people’s security.

"If we were more hospitable, that would be better for the Calaisiens themselves. If we want to make the life in Calais better, we should put in place the policy of hospitality, which doesn’t leave them [migrants] in a totally ignominious situation," Caillaux said.

De Wenden stressed that France had the means to welcome migrants and the strategy of deterrence had been failing for three decades.

"The idea ‘if we receive them better, it will have a pull effect’ is wrong. People fleeing a dramatic situation will not be less determined to arrive whether we scare them away less or more. We already destroyed their settlements twice, but since Calais is in front of Dover, people will continue coming," de Wenden concluded.

Masked Refugees Clash With Police in Calais Camp
According to the HRW, refugees and migrants are living in the streets and in the woods in and near Calais.

On Thursday, French President Emmanuel Macron said during the visit to an accommodation center in the city of Orleans that he did not want any refugees staying in the streets or in the woods "by the end of the year."

The president proposed to set up emergency shelters across France and stressed that the current administrative policy of the treatment of migrants was completely ineffective.

Hundreds of thousand of migrants have been arriving in Europe hoping to escape the conflict and poverty in their home countries. According to the French Interior Ministry's July 11 press release, France received 85,726 asylum requests in 2016, an increase compared to 80,075 demands in 2015.