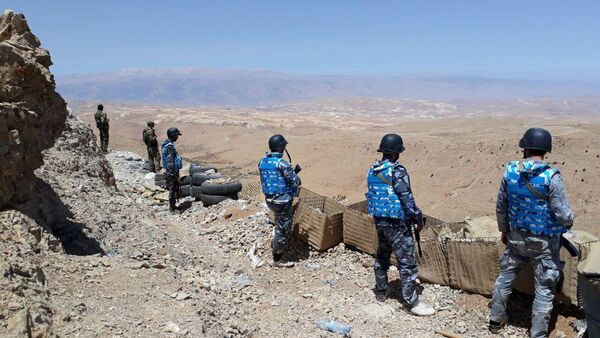 The Syrian Army, together with Hezbollah, won the battle against al-Nusra Front and freed the mountainous area around the town of Fleita near Jurud Arsal on the eastern slopes of the Calamun mountain near the Syrian-Lebanon border.

The End is Near: Syrian Army Intensifies Its Grip of Steel on Daesh
The success of the Syrian Army and its allies is explained by the high speed of the operation, good maneuverability and the poorly organized defense of the terrorists.

The features of the mountainous terrain with its large number of heights and hidden paths were taken into account, as well.

A field commander of the Syrian Army told Sputnik, “It took 24 hours in total to break the terrorists' defense and knock them off their positions.”

As a result, the enemy's forces suffered heavy losses and lost control over the strategic routes connecting Arsal and Jurud-Fleita, through which weapons from Lebanon were supplied into Syria, the source said.

Since the beginning of the counterterrorist operation in this region, the Syrian Army has taken control of 36 square kilometers of territory, eliminating more than 70 al-Nusra fighters.

The Jurud Arsal’s topography is tough and the battle against al-Nusra Front was a challenging one, according to an anonymous source.

“Al-Nusra was entrenched in its hilltops and valleys, turning these areas into combat facilities that even airplanes couldn’t reach,” the source added.

Jurud Arsal, which is a mountainous area around the Lebanese border town of Arsal, is mostly barren, but it is home to tens of thousands of Syrian refugees who live in and around the town, some in camps.