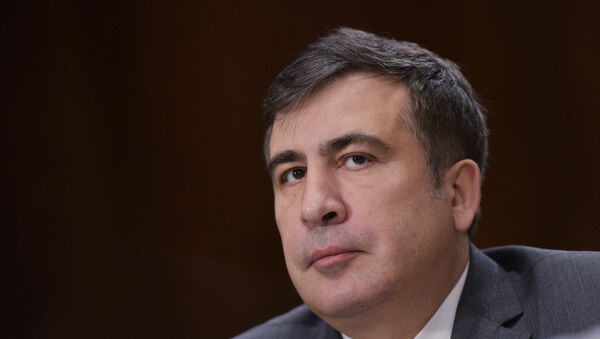 KIEV (Sputnik) — Saakashvili resigned from the position of the Odessa region governor on November 7, 2016, citing Kiev's reluctance to fight corruption as the reason for his resignation and accusing the Ukrainian President Petro Poroshenko of protecting the criminals.

Saakashvili's Appointment as Odessa Governor Was 'Insult' to Ukrainians - Putin
Saakashvili, a fugitive from prosecution in his homeland Georgia, was granted Ukrainian citizenship and appointed the governor of the Odessa Region in 2015.

He served as Georgia's president between 2004 and 2013. Saakashvili left Georgia after incumbent president Giorgi Margvelashvili took the office in November 2013. In July, the prosecutor's office in Georgia pressed several criminal charges against the ex-president, particularly accusing him of embezzling $5 million form state coffers for personal purposes.

Saakashvili Plots Return to Georgia After Ukraine Fiasco
On Tuesday, Saakashvili said he was in the United States in a Facebook post. Later, Saakashvili's "Movement of New Forces" party of Ukraine confirmed this information. The former Georgian leader cannot return to Ukraine, as he would be immediately sent to Georgia as a non-Ukranian citizen, Petro Poroshenko Bloc Solidarity member and lawmaker Serhiy Leshchenko said earlier on Wednesday.