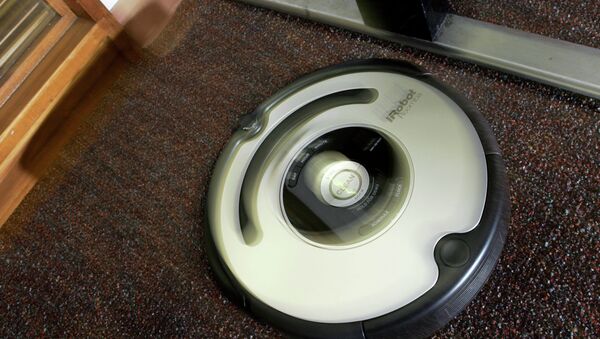 © AP Photo / Elise Amendola
Subscribe
The creators behind the vacuuming robot Roomba have unveiled new plans for their helpful gadget, but it’s not something everyone is going to be thrilled about. *insert Vincent Price’s menacing laugh*

iRobot, the American company established by three Massachusetts Institute of Technology graduates, essentially wants to start selling the floor plans of its customers’ homes to big tech companies like Amazon, Apple or maybe even Google.

Hilarious Cat Rides Roomba Hoover Like a Boss
Their end goal is for the plan to help other smart home devices to operate more efficiently using the Roomba’s ability to track movement data, according to Colin Angle, the company’s CEO.

"There’s an entire ecosystem of things and services that the smart home can deliver once you have a rich map of the home that the user has allowed to be shared," Angle told Reuters.

But exactly how specific would the details be?

According to the company, the data sharing would include everything from the location of your bed to home security cameras and thermostats.

Considered a "major breakthrough" for the advancement of smart homes, Guy Hoffman, a robotics professor at Cornell University, told Global News that regularly updating its spatial data maps would allow sound systems, for instance, to adjust to a home’s acoustics as well as even tweaking the lighting in a room.

While the benefits of having to manually control fewer gadgets does sound enticing, the one clear issue at hand is the risk to consumer privacy.

​While it may be years before the deal is finalized, users do have a way to limit the data sharing of their beloved cleaner; unfortunately, it’ll leave users unable to control the bot via Wifi or Bluetooth capabilities.

​In the meantime, the company is already doing damage control."“We will always ask your permission to even store map data," it insisted to CNET. "Right now, iRobot is building maps to enable the Roomba to efficiently and effectively clean your home.”

So just remember folks, big brother is watching — even if he does just want to know how often you watch TV or maybe how often you clean your home. Say hello to targeted ads!