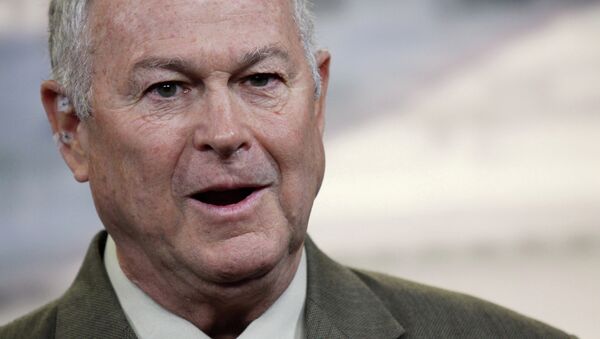 Chairman of the Russian upper house of parliament's Foreign Affairs Committee Konstantin Kosachev on Wednesday ruled out any attempts of the Russian side to interfere in the US lawmaking process during US Congressman Dana Rohrabacher's visit to Moscow in April 2016.

US 'Actively' Seeks to Impose Sanctions Under Global Magnitsky Act - State Dept.
MOSCOW (Sputnik) — Last week, US media reported that Rohrabacher allegedly received a document from the Russian General Prosecutor’s office during his last year's visit to Moscow, which allegedly called for changing the stance of the US Congress on the Magnitsky story and holding a hearing on the respective act.

On Tuesday, Kremlin spokesman Dmitry Peskov said Russia and the United States are not holding any talks on the potential revision neither of the Russian law banning the adoption of Russian children by US families nor of Magnitsky Act.

"I cannot say to what extent it was directly related to the Magnitsky Act, as this is about a US law. We are absolutely unsatisfied with it. But It would be completely incorrect to again try attributing it to allegations that we are attempting to interfere in the legislative process, which is organized by the US Congress. The meeting [with Rohrabacher] did not mention it, we certainly do not do these sorts of things," Kosachev said at a Rossiya Segodnya International Information Agency press conference.

US Will End Up at War Without Balanced View on Russia - Congressman Rohrabacher
Kosachev confirmed that, according to his information, a meeting between Rohrabacher and Russian prosecutors took place and assumed that it could have been focused on the activities of William Browder, the CEO of Hermitage Capital Management that employed Magnitsky to looking into tax evasion allegations against it.

The Magnitsky Act was adopted in 2012 to introduce travel bans and financial sanctions on Russians allegedly involved in the death of Russian lawyer Sergei Magnitsky in 2009 during pre-trial detention on conspiracy and tax evasion charges.