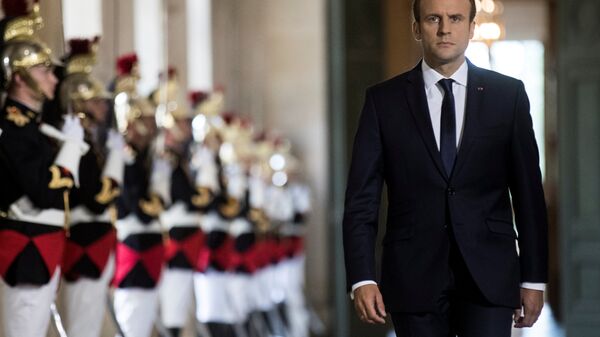 © REUTERS / Etienne Laurent/Pool
Subscribe
International
India
Africa
An opinion poll reveals that Macron’s approval rating has slumped to the lowest level for a French president two months into his term.

French Fall Out of Love With Macron: What's Behind the Dip in President's Rating
MOSCOW (Sputnik) — Incumbent Emmanuel Macron’s approval rating has slumped to the lowest level for a French president two months into his term, an opinion poll out Wednesday has showed.

Forty-two percent of 1,022 people sampled by Ipsos on July 21-22 said they had a positive opinion of the centrist president, down from 45 percent a month before.

The negative view has meanwhile soared by 15 points to the equal 42 percent, indicating that the nation is split down the middle over how Macron is faring.

The pollster said the predecessors – Jacques Chirac, Nicolas Sarkozy and the nation’s least popular Francois Hollande – all enjoyed a stronger popularity score of over 50 percent at the same point in their presidency.

The majority of Macron’s ministerial team has likewise seen their approval ratings slump early on amid controversy surrounding the president’s plans for a tax reform and severe military spending cuts, which have caused the armed forces chief Pierre de Villiers to stand down.