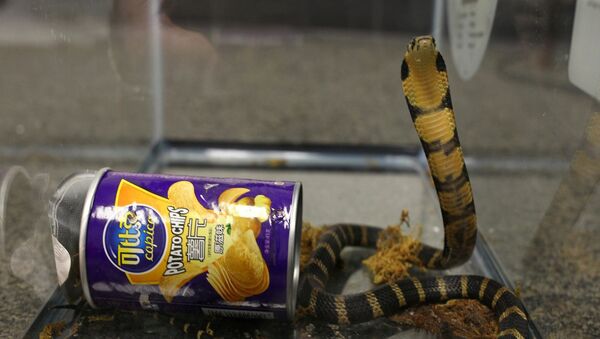 © United States Attorney's Office Central District of California/Handout via REUTERS
Subscribe
A Los Angeles man is behind bars, following the discovery of three very live and venomous two-foot-long king cobra snakes hidden inside potato chip cans in a package addressed to him.

WATCH: King Cobra Sneaks Into Malaysian Apartment, Owner Scared Snakeless
The charges? Illegally importing snakes and a slew of other reptiles banned under the Convention on International Trade in Endangered Species of Wild Fauna and Flora, according to a news release from the Los Angeles District Attorney’s Office.

The months-long investigation initially began back in March when authorities first intercepted the package, which also included three albino Chinese soft-shelled turtles. The alleged intended recipient, 34-year-old Rodrigo Franco, who was arrested Tuesday, had tried to ship out six other protected turtles to Hong Kong on the same day.

So how did officials zero in on Franco?

A (non-venomous) sting, of course! While the US Postal Service-shipped snakes wound up being seized by Customs and Border Protection, special agents from the United States Fish and Wildlife Service let the soft-shelled turtles be delivered to Franco’s Monterey Park, California, home.

After accepting the package, agents then executed their warrant, and were shocked by their findings. Inside the California estate, authorities found a baby Morelet’s crocodile, tanks containing alligator snapping turtles and five diamondback terrapins – all of which are protected endangered species.

'Til Death Do Us Part: Snake Bites Man, Man Bites Wife So They’ll Die Together
During an interview with Franco, the Southern California man informed officials he had previously received 20 king cobras in two separate shipments, but, sadly, they had all died in transit.

WhatsApp messages obtained by authorities between Franco and his connection, identified as Anji, revealed the two discussing the shipment of turtles and snakes to and from Hong Kong.

If convicted, Franco, aka "Carlos Sandoval," could face a maximum sentence of 20 years in federal prison, despite guidelines typically calling for lesser prison terms, Raw Story reported. He is currently scheduled to be arraigned in August.

Two of the seized king cobras are being cared for at the San Diego Zoo. The third died for unknown reasons, according to the Los Angeles Times.