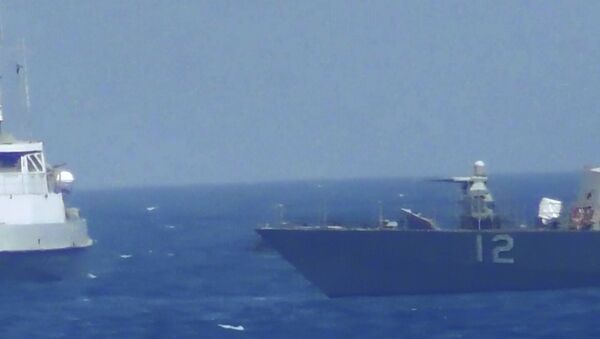 A US Navy patrol boat fired warning shots on Tuesday near an Iranian vessel in the Persian Gulf. Tehran slammed the incident as “a provocation.” In an interview with Sputnik, military expert Dmitry Litovkin said that the mere presence of US warships in the Gulf is fraught with unpredictable consequences.

US Navy Tests Laser Weapons System in Persian Gulf
It said that the US ship had come dangerously close to the Iranian naval ship on a patrol mission in international waters the north of the Gulf, and fired two warning shots “with the intention of provoking and intimidating” the Iranian sailors.

According to Iran’s Press TV, the Iranian ship ignored the Americans’ “provocative and unprofessional act” and proceeded with its mission. The IRGC later said that the US ship had left the area.

In an interview with Radio Sputnik, military expert, Captain 3rd Rank, Dmitry Litovkin said that there is no place for the US Navy in the Persian Gulf.

“The Persian Gulf is very far away from US territorial waters. Still, it was the American ship that opened fire. Iran is washed by the Persian Gulf and has a security zone there, which it controls. What the US Navy is doing there is a very big question,” Litovkin said.

He added that the Americans have several big naval bases in the region, which apparently control oil traffic in the Gulf.

“From the standpoint of the International Law of the Seas, the Americans’ actions in the Gulf are absolutely illegal. What are they doing there? They are conducting a military operation in Iraq and trying to impose democracy on Syria. All the other countries in the region which are against this are thus seen as being in the way,” Litovkin noted.

He said that the US was doing much the same in other parts of the globe.

“I remember how a Russian fighter jet ”buzzed” a US destroyer in the Black Sea, turning on its electronic jammer and forcing the  shocked Americans to beat a hasty retreat. However, it was the US ship approaching our shores, not our plane flying towards the US coast. It’s a case of who is at home and who is not,” Dmitry Litovkin emphasized.

US Navy Ship Fires Warning Shots at Iranian Vessel in Arabian Gulf - Reports
In a similar incident in August, Pentagon officials said Iranian speedboats had “harassed” US warships in the Strait of Hormuz. They claimed that Iranian boats moved close to two US Navy destroyers with their weapons uncovered in the strait in an “unsafe and unprofessional” encounter.

Based on the United Nations Convention on Law of the Sea (UNCLOS), Iran has the right to “decisively confront” any menacing passage through the Strait of Hormuz, according to IRGC second-in-command,  Brigadier General Hossein Salami then told Press TV.