US Nukes in Turkey Not Secure, Former US Defense Officials Say 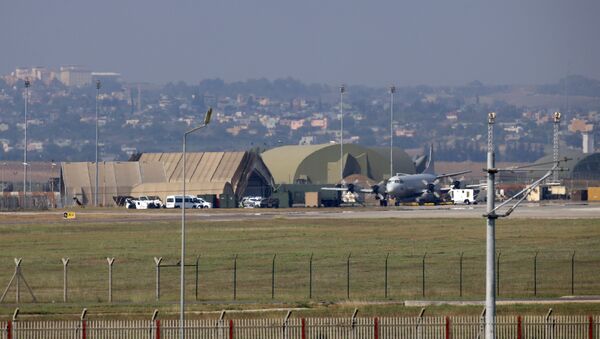 © AFP 2023 / STR
Subscribe
International
India
Africa
Ex-Pentagon officials have called for the US to pull its nuclear weapons from Turkey’s Incirlik Air Base as tensions linger between Washington and Ankara.

Joseph Cirincione, president of the nonproliferation and anti-war Ploughshares Fund nonprofit, told Stars and Stripes that the Turkish base was the "worst place possible to be keeping"roughly 50 of Washington’s nukes.

Cirincione said there are B61 gravity bombs stored at Incirlik, the maximum yield of which has 10 times the power of the bomb Washington dropped on Hiroshima in 1945.

Officials have also suggested relocating the 2,500 US troops currently housed at the base.

Relations between Turkey and the US have been on the decline since the failed coup in Ankara in July 2016. President Recep Erdogan has been cracking down on the government’s opposition since last summer, leading NATO and other observers to worry the country is taking a turn towards authoritarianism.

Some estimates say that more than 70,000 people have been arrested for alleged involvement in the uprising, including judges, military and police officials, university professors and other dignitaries.

Turkey-Germany Rift: Why Russia is the 'One to Win'?

Also at issue is Ankara agreeing to buy Russia’s S-400 Air Defense System, and its taking issue with the goals of the US-lead coalition in Syria.

During a July 25 address to Parliament lawmakers from the ruling Justice and Development Party (AKP), Erdogan defended the purchase, asking "Why will it cause tension? A country should be in search for the ideal ways for its own security," according to Hurriyet Daily News. Erdogan pointed out that for years Greece, a NATO member state, has been using the Russian-made system without controversy.

There is also suspicion in Washington that Turkey may have leaked the locations of sensitive US bases in Syria to a state-run news agency.

Former deputy commander of US European Command Charles Wald told Stars and Stripes that Washington is looking "rather weak… uncoordinated and not very strategic" in front of an ally that is behaving lately like more of an adversary.

"Right after the coup attempt they shut our base down for about a week… I think Turkey needs to be treated in some cases, at the very least, as neutral," he advised.

In June, Germany decided to pull its forces from Incirlik after Turkey refused to let German MPs visit the base, a response to Berlin granting asylum to Turkish soldiers believed to be involved in July’s ill-fated insurrection.

One former senior NATO official said that regional issues make Incirlik an unsafe place for US weapons, telling Stars and Stripes, "If there are nuclear weapons stored in Turkey, they should be removed given the instability, both in the country and across the border in Syria and Iraq."