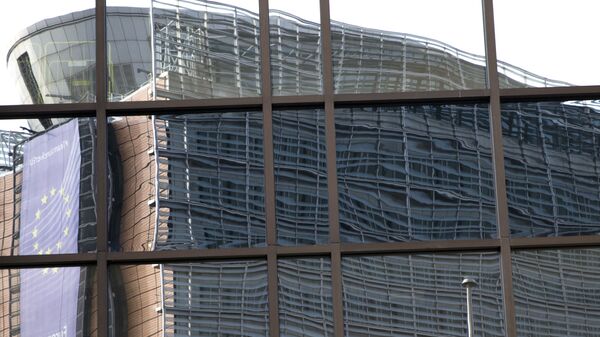 © AP Photo / Virginia Mayo
Subscribe
International
India
Africa
An EU source said that the Council of the European Union's Committee of Permanent Representatives agreed on Wednesday to expand the list of anti-Russian individual sanctions on the initiative of Berlin.

Future of Russia-EU Relations Depends on Brussels Reaction to New US Sanctions
BRUSSELS (Sputnik) — The Council of the European Union's Committee of Permanent Representatives (Coreper) agreed on Wednesday to expand the list of anti-Russian individual sanctions on the initiative of Berlin, an EU source told Sputnik.

"The possibility of adding new listing to the sanctions list (Ukraine, undermining sovereignty) was discussed in COREPER today, based on a German initiative. The discussion was consensual, there was broad support for the DE proposal," the source said.

The source noted that the technical work on the corresponding relevant acts would follow.

"The Council will need to adopt legal acts. It is likely to be via written procedure," the source said.

On Monday, the Reuters news agency reported, citing diplomatic sources, that Germany offered to add up to four Russian citizens and organizations to the sanctions list in connection with the situation around the transfers of turbines produced by Siemens Gas Turbines Technologies, a joint venture with the Russian Power Machines company, to the Crimean peninsula.

In early July, Siemens created a task force team to investigate reports about the transfers of turbines. Last week, the company said it had "credible information" that all four of its turbines intended for the project in Taman were illegally delivered to Crimea. Siemens decided to annul a power plant equipment supply license agreement and suspend power equipment supplies to Russian state firms to devise new control measures.