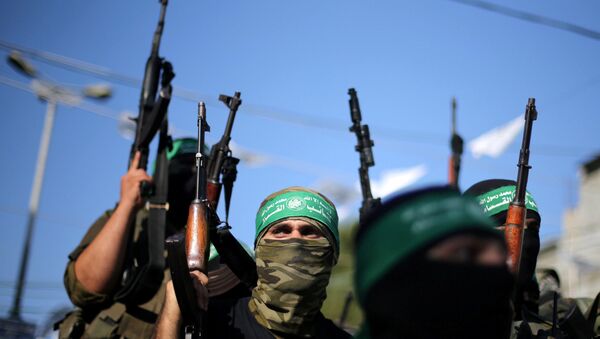 © REUTERS / Ibraheem Abu Mustafa
Subscribe
International
India
Africa
The European Court of Justice, the European Union's top court, has rejected a request to remove Palestinian fundamentalist group Hamas off the EU's list of terrorist organizations. The case has now been referred back to a lower court.

The EU first labeled Hamas a terror group in 2001, freezing the faction's assets and imposing travel bans on its members in the process. The movement took power in Gaza in 2007, where it has remained in ever since — over the subsequent decade, it has fought three wars with Israel, the last in 2014 which caused massive destruction, left over 2,000 dead and reduced Gaza to a state of nigh on total aid dependency.

2/ The EU continues to consider Hamas a terrorist organisation; measures restricting its activity remain in force

The decision was then annulled by the EU's General Court in 2014, on the basis there was insufficient evidence to maintain the restrictions on Hamas — the Court found the ruling was based on "factual imputations derived from the press and internet" rather than solid legal arguments, and/or acts examined and confirmed by authorities.

The move sparked much outrage in Israel and the US, and EU Member States subsequently appealed the judgment in the ECJ. The UK was not among them — the Home Office's list of proscribed groups merely bans its military wing, the Izz ad-Din al-Qassam Brigades.

The Luxemburg-based judges ruled the General Court "should not have annulled" Hamas's status as a terror group, and while a competent authority is needed to place an organization on the blacklist, there is no such condition for subsequent retention. The finding contradicted earlier suggestions by the Court's senior lawyers that Hamas' removal would remain in place.

#ECJ: #GC wrong to annul Hamas’ retention on terrorist list for procedural error and sends back to #GC https://t.co/mgbSrzXMp1

EU officials claim the list is drawn up from precise information that a person, group or entity has been investigated or prosecuted for a terrorist act, or has demonstrably attempted to carry out or facilitate such an act — and also draws on the United Nations Security Council's own terror group list.

Israeli Tank Attacks Hamas Post in Gaza Strip – IDF
Listings are reviewed at least every six months, and they can be proposed for addition or removal by Member States and non-bloc participants alike, or indeed by groups, entities and individuals that feature on the list themselves. Removals aren't particularly rare — on the same day the ECJ ruled Hamas must remain, its judges also decided Sri Lanka's separatist Liberation Tigers of Tamil Eelam should be expunged.

In all, there are 68 groups on the EU's terror list as of July 2017. They include the Abu Nidal Organisation (AKA Black September), the Al-Aqsa Martyrs' Brigade, the Communist Party of the Philippines, Hezbollah's Military Wing, Hofstadgroep (Dutch citizens of North African descent, responsible for the murder of film director Theo van Gogh), the Kurdistan Workers' Party (PKK).

Interestingly, Daesh (also knows as Islamic State) does not appear.