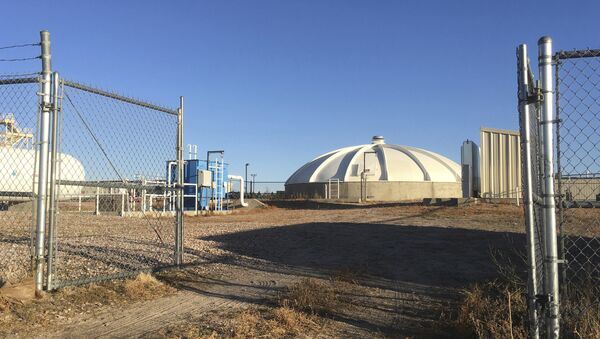 © AP Photo / Dan Elliott
Subscribe
International
India
Africa
On Tuesday, the US Air Force finally acknowledged responsibility for contaminating the water at a east Colorado Springs air base and its surrounding areas.

In a report released Tuesday, service investigators confirmed that groundwater surrounding Peterson Air Force Base had been tainted by perfluorinated firefighting foam chemicals, based on dozens of water and soil tests taken at the base last year.

Several sites where the chemicals had been sprayed directly on the ground by firefighters since the 1970s were highlighted in the report. Despite decades of research noting the danger of using the chemicals, they remained in wide use, and military officials are dealing with similar contamination issues all across the country.

Research has found that laboratory animals exposed to the chemicals suffered low birth weights and cellular and liver damage, according to KKTV.

The levels of perfluorinated chemicals found during testing at the Colorado Springs site were more than 1,000 times higher than the limit put forth by a national health advisory.

Greg Lauer, a council member from nearby Fountain City told the Denver Post, "It makes me really angry that it has taken them this long to get some numbers — and more than a little concerned."

"We and our ratepayers are going to be dealing for a very long time with this problem we did not create."

Roy Heald, who manages the Security Water and Sanitation District near Colorado Springs, said that after municipal wells were contaminated the agency spent $3.6 million on alternative water sources and pipelines. But the US Air Force has not yet furnished the $800,000 in reimbursements they promised.

Notably, Tuesday’s report said contamination at the base was most acute at Peterson’s fire training pit, despite there being a plastic liner in place to prevent the chemicals from leeching into the groundwater. Investigators blamed this on "overspray" from firefighters.

Though Air Force investigators admitted that Colorado Springs sewers had been used to dispose of contaminated waste, they glossed over any possible pollution of drinking water.

"The holding tank is occasionally drained into the sanitary sewer system, but such events are rare," they wrote, adding that 10,000 to 20,000 gallons of chemical-laden wastewater was drained with each release.

Peterson officials last year admitted to storing chemical-tainted water from the fire pit in a tank nearby, pumping it into Colorado Springs' sewers three times a year, likely tainting the Widefield Aquifer nearby, where high quantities of the chemicals were found last year. The aquifer serves about 65,000 residents, among them the 20,000 of Fountain City, according to the Colorado Department of Health and Environment.

When the water passes through the Colorado Springs Utilities' treatment plant the chemicals are not removed, and once it leaves the plant that water heads for the aquifer’s primary water source, Fountain Creek.

Rep. Doug Lamborn (R-CO) called for funds to be allocated for testing people for health issues related to toxic water and contamination clean up. "The people of the surrounding communities are patriotic Americans who will do whatever they can to help our national defense," he said in a statement. "But they should not be called upon to suffer needless environmental burdens."