Ukraine's Only Major Warship Out of Commission, Funds for Repairs Feared Stolen 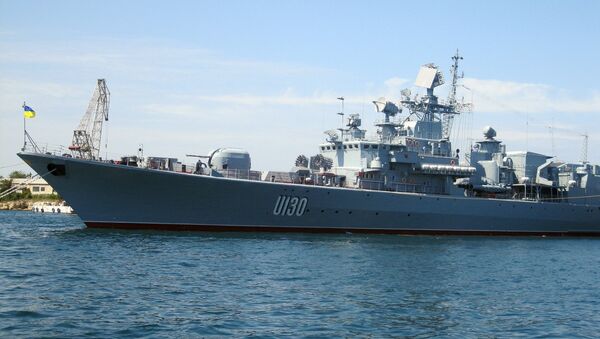 Ukrainian military prosecutors are suing the company charged with repairing the Hetman Sahaydachniy frigate, whose engines broke down soon after costly repairs. Speaking to Sputnik, military observer Konstantin Kivkov said that the story around the frigate is a 'shining example' of officials' efforts to deprive Ukraine of its defense capabilities.

Last week, the 12-day US-Ukrainian Sea Breeze 2017 naval exercises wrapped up in Ukraine's Odessa and Nikolayev regions. 17 nations, including the UK and Turkey, took part in the drills.

'Useless Drills': Why NATO Warships Called at Ukraine's Odessa Port
Conspicuously absent from the exercises was the Hetman Sahaydachniy frigate, the flagship of the Ukrainian Navy, which sat out the drills in the port of Odessa, left unfixed after suffering engine failure in May, shortly after undergoing repairs.

The ship did not go entirely unused however. During the exercises, Ukrainian President Petro Poroshenko boarded the ship for a photo opportunity with Ukrainian and NATO sailors. Congratulating participants, Poroshenko said the drills were an expression of unity and readiness to jointly defend the common values of the transatlantic community.

Political observers say that Poroshenko's audacity in using the Hetman Sahaydachniy for his media event may have broken some sort of political record. After all, the scandal surrounding the ship's breakdown following costly repairs is directly connected to one of his companies.

Ukrainian Navy's Flagship Frigate Breaks Down Immediately After Costly Repairs
In May, military prosecutors in southern Ukraine initiated a lawsuit against the Leninskaya Kuznitsa Shipyard, a Nikolayev-based construction and repair facility owned by the Ukrainian president. Leninskaya Kuznitsa won a 14.5 million hryvnia ($561,000 US) tender for the repair of the ship, including its engine, in December. However, prosecutors complained that the ship's diesel engine propulsion system broke down almost immediately after repairs were said to be completed.

Prosecutors said that "with the aim of rectifying the legal violations," and in connection with the "possible negative consequences" for defense capabilities of the Ukrainian Navy, they are seeking to recover some 668,000 hryvnia ($25,000 US) in punitive damages.

Commenting on the ongoing scandal around the incident, senior military observer Konstantin Sivkov told Radio Sputnik that he was certain that most of the money allocated for the frigate's repair was simply stolen.

"About 15 million hryvnia was allocated to its repair. That's not peanuts," Sivkov said. "Considering that this is not a very large ship, for it this is a big amount. In fact, for this amount of money one could modernize and fully reequip the ship. And here, apparently, the ship wasn't modernized, but simply underwent repairs to make it seaworthy."

Now, the observer noted, "it turns out that the repairs were carried out in - let's say a very unseemly manner. The money allocated for the overhaul was not simply enough, but more than enough; for this amount of money it would be possible to replace all the ship's components. But apparently, as is typical for the current Ukrainian ruling elite, this money was simply stolen...with practically nothing left for repairs. And that's why what happened, happened."

Millions of Dollars Stolen From Ukrainian 'Border Wall With Russia' Project
Sivkov noted that the story surrounding the Hetman Sahaydachniy reminded him of another scandal-ridden Ukrainian security project – the so-called 'wall' on the Ukrainian-Russian border. In 2015, Kiev had allocated about 4.1 billion hryvnia ($160 million US) to the project. Now, prosecutors are investigating the theft of about $3.8 million from that project.

"I think that this frigate will suffer the same fate as the 'wall' on the border which Russia, another project to which a great deal of money was allocated, only to be stolen," the expert said.

"The thing is, the current Ukrainian authorities clearly understand that they are temporary, and are therefore using any means possible to build up their fortunes using major national projects. It must be understood that they have no interest in maintaining military equipment in fighting condition. Primitive schemes to siphon off, grab and escape with the money – that's the psychology and logic of Ukrainian authorities." And in this situation, "the Ukrainian Navy has no prospects," Sivkov concluded.