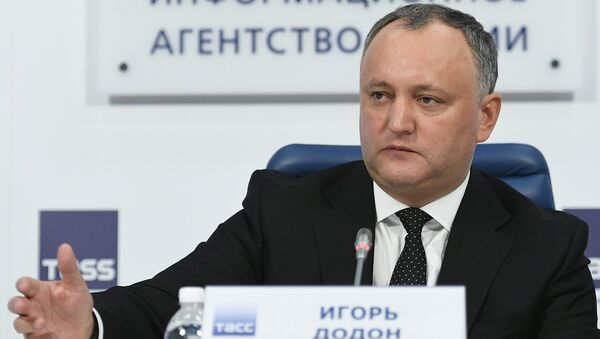 Moldovan President Igor Dodon said that Moldova's strategic partnership with Moscow is pivotal for the country.

"I do not mind cooperation with the European Union, we should be friends with everyone. But Moldova will not survive without the strategic partnership with Russia. Everybody should understand this," Dodon said while answering questions of his followers during a live Q&A session in the Odnoklassniki social network.

The Moldovan president noted that he would strive for the achievement of five goals he had set for himself.

"It is the protection of the national identity, the Moldovan language and Moldovan history. I categorically oppose those who want the integration between Moldova and Romania," Dodon said.

The second goal concerned Orthodox Christianity "without which Moldova as a state will not exist," the president continued.

"I will not allow for Moldova to enter NATO. We cannot carry on war against one side for the sake of another's geopolitical interests," Dodon further noted.

The fourth goal was related to the reintegration with Transnistria which "has no future without Moldova," Dodon pointed out.

"The fifth [goal] is the strategic partnership with Russia," the Moldovan leader said.

Since his election as Moldova’s president in late 2016, Dodon has repeatedly emphasized the importance of the Russian-Moldovan strategic cooperation which had been initially voiced during his election campaign. The president’s stance contradicts the views of pro-EU Moldovan Prime Minister Pavel Filip, who opposes the country’s integration with the Russia-led Eurasian Economic Union (EAEU) over its inconsistency with the free trade regime between Moldova and the European Union introduced in 2014.