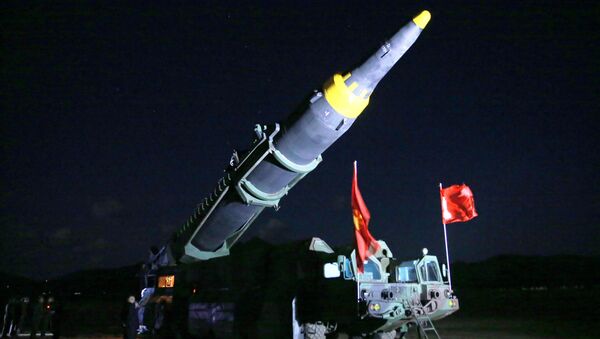 North Korea has vowed to unleash a “merciless blow at the heart of the US with our powerful nuclear hammer” if the Americans attempt to depose their leader Kim Jong-Un - and intelligence officials say that the DPRK may be able to back that threat up, years ahead of schedule.

The new round of hostile rhetoric comes in the wake of comments from CIA Director Mike Pompeo during the July 21 Aspen Security Forum. "It would be a great thing to denuclearize the [Korean] Peninsula, to get those weapons off of that, but the thing that is most dangerous about it is the character who holds the control over them today," Pompeo told The New York Times.

"So from the administration's perspective, the most important thing we can do is separate those two. Right? Separate capacity and someone who might well have intent and break those two apart." Pompeo's comments refer to North Korean dictator Kim Jong-un, who has accelerated the nuclear program pursued by his deceased father.

"I'm hopeful that we will find a way to separate that regime from this system. The North Korean people, I'm sure, are lovely people and would love to see him go."

Pompeo did not directly state that the US or the CIA was seeking regime change in North Korea, but he strongly implied it. This provoked furor in Pyongyang — while the American desire to see the Kim family booted from their seat has always been rumored and discussed in foreign policy circles, this is perhaps the closest any American leader has come since the Korean War to stating that they want to see the Kims out of power.

"Although [Pompeo's] reckless remarks are just balderdash of a guy who has become so angrily desperate due to the ever-increasing nuclear strike capability of the DPRK, they have gone over the line, and it has now become clear that the ultimate aim of the Trump administration's hostile policy towards the DPRK is … 'regime change,'" said a spokesman from the DPRK's Foreign Ministry.

"Our army and people have never thought about their destiny and future separated from their supreme leadership," the statement went on to say. "The first and foremost mission of our revolutionary armed forces with the nuclear force as their backbone is to defend the leader at the cost of their lives."

"Should the US dare to show even the slightest sign of attempt to remove our supreme leadership," it added, "we will strike a merciless blow at the heart of the US with our powerful nuclear hammer, honed and hardened over time."

The comments went on to say that Pompeo's comments were demonstrative of "illiteracy about the DPRK and an explicit illustration of incompetence of the US intelligence community," and that the likes of the CIA chief "will bitterly experience the catastrophic and miserable consequences caused by having dared to shake their little fists at the supreme leadership."

Building a nuclear ICBM to cross the Pacific Ocean and strike the United States seemed a distant possibility not that long ago — until recent years, where DPRK missile tests perennially exceeded expectations.

A new report from the Defense Intelligence Agency (DIA) released on Tuesday claimed that the DPRK will be able to produce a "reliable, nuclear-capable ICBM" within a year. Just a few years ago, that same estimate was usually around 2025 or 2030.

The DIA estimate corroborates South Korean intelligence reports, which have expressed surprise at the speed by which the DPRK develops these weapons. "The speed of North Korea's ICBM missile development is faster than the South Korean Defense Ministry expected," said Lee Cheol-hee, a National Assemblyman with the ruling left-wing Minjoo party during an intelligence committee hearing.