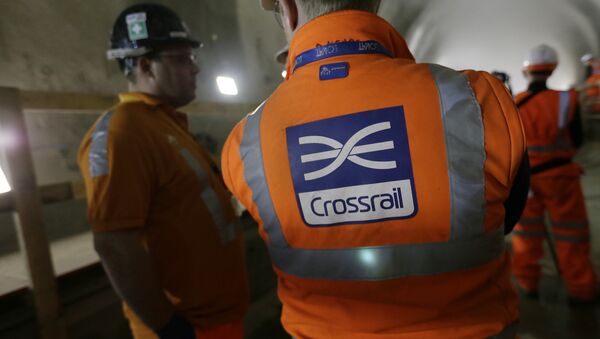 © AP Photo / Tim Ireland
Subscribe
International
India
Africa
The British government, backed by London's Mayor Sadiq Khan, has given the green light to the Crossrail 2 project. The £30 billion (US$39 billion) project would create a new north-south railway under London.

It would follow in the footsteps of Crossrail, which is due to open in 2018, which is east-west.

But while Crossrail — which will be known as the Elizabeth Line when it comes into service — links to Heathrow airport, there is no plan currently for Crossrail 2 to be plugged into London's second airport at Gatwick.

The project's announcement comes a day after rail electrification projects in Wales, the Midlands and the North were canceled, and some provincial politicians are crying foul and claiming too much taxpayers' money is being spent on the capital.

Many London businesses had feared that Crossrail 2's omission from the Queen's Speech meant it had been shelved by a government which feared it would be unaffordable in the wake of Brexit.

But on Monday, July 24, it was confirmed that the Conservative government and their Democratic Unionist Party allies, were pressing ahead with the project, which is set to be up and running by 2033.

Transport Secretary Chris Grayling and the @MayorofLondon have agreed to work together on plans for Crossrail 2 https://t.co/Nide9ePVhS pic.twitter.com/34sJCQvbLC

The Transport Secretary Chris Grayling met the Labour Mayor of London earlier in July to discuss Crossrail 2, and Mr. Grayling offered the government's support for the project.

They agreed that London would stump up half of the cost.

More details of how it would be financed are expected to be unveiled in the Chancellor of the Exchequer Philip Hammond's budget in November.

"I am a supporter of Crossrail 2, but given its price tag we have to ensure that we get this right," said Mr. Grayling, who is dubbed "Failing Grayling" by his detractors.

"The Mayor and I have agreed to work together on it over the coming months to develop plans that are as strong as possible, so that the public gets an affordable scheme that is fair to the UK taxpayer," he added.

"Crossrail 2 is essential for the future prosperity of London and the south-east, so I'm pleased that the Transport Secretary and I have reached an agreement to take this vital project forward," said Mr. Khan.

"We will continue to work together to ensure the project is value for money and provides the maximum benefits for jobs and growth in the region over the coming decades," he added.

Crossrail 2 would link commuter towns in Hertfordshire and Surrey with central London stations like Euston, Tottenham Court Road and Victoria.

But in June the route was adjusted and plans for a brand new station at King's Road Chelsea, serving one of the wealthiest parts of west London, were scrapped.

The station had been opposed by Chelsea-based celebrities like actress Felicity Kendal and broadcaster Loyd Grossman, who claimed it would damage the area's "village atmosphere."